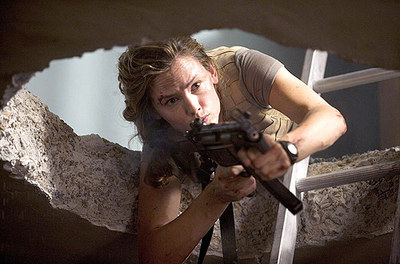 Now that the Iraq War has lasted longer than the American involvement in World War II, we can hardly wait to start making movies about our current misadventure. However, so far films about the Iraq War haven’t assumed a shape of their own. They have neither the linear, confident narratives of American films about World War II, nor the elegiac sense of Vietnam war films, with their nostalgic period music and operatic spectacles.  The Iraq War films also don’t evince the historical fissure and loss of the Vietnam War films. The historical framework of the Iraq War, like the war itself, is still under construction.

A clue about how we’re starting to remember the war can be seen in the genres into which the conflict has been stuffed.  Paul Haggis’s In the Valley of Elah is a crime procedural. The film tells the story of an Iraq war veteran who goes AWOL from his base in New Mexico, only to turn up in the desert, charred and dismembered. His father, a retired Army sergeant, undertakes the investigation into the mystery of his son’s disappearance and death. The film has some contemporary touches, such as the cell phone camera images that provide the initial clues to the soldier’s disappearance, but for the most part it stays within the traditional bounds of its genre.

The Kingdom is a can-do thriller that’s not explicitly about the Iraq War, but its rhetorical mode is a direct recasting of it. The documentary visual style establishes the particularities of the setting while blurring the narrative’s historical specificity and the film’s clear debt to the macho histrionics of the Rambo series. Less brooding than Elah, the film is hardly any more confident in a positive ending to its intervention. Four F.B.I. agents collect evidence and extract some vengeance–the two sides of torture. But all is not well at the end: just before the main terrorist goes to collect his virgins in heaven, he issues a threat that promises to renew the violence against America.  This isn’t quite the upside-down flag image that concludes Elah, but in the context of its ironclad generic rules, the note of irresolution is unsettling. Either there’s going to be a movie sequel (The Enclave?) or a sequel in the form of an invasion of Iran. There a dual temporality in the film: the band of terrorists is vanquished, but the threat of terrorism is deathless.

If films, like poetry in the words of Frances Bacon, "give some show of satisfaction to the mind, wherein the nature of things doth seem to deny it," then Elah
and Kingdom allow their audiences to recollect the Iraq War according to a narrative form that’s consoling only in its coherence. The generic rules of these films set up a peripeteia, as the basic structure of their narratives and as the master narrative of the war itself. Peripeteia works by establishing a set of expectations that turn out to be false. We get an ending, but not the one we’d been led to believe we’d receive. The uncertainty of the endings of these films is indicative of the entire history of the war they depict. The issue isn’t simply we don’t know how the war will turn out. We already know it’s not going to turn out well. Rather, we get a reversal that defies our initial expectations, as well as a disturbing temporality in which any foe we may conquer won’t vanquish the enduring threat against the nation. In short, shock and awe has turned out to be the permanent war.