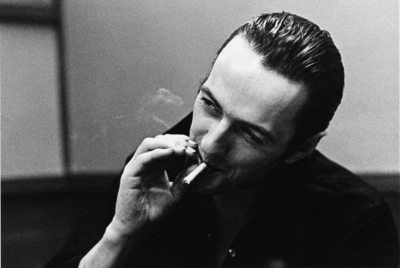 I first started listening to the Clash when they were still known as "the only band that matters." That this was a promotional lark thrown out by their record company, CBS, didn’t matter, for once. I’d just missed the Sex Pistols before they self-immolated, and the Ramones seemed a bit clownish to me, so the Clash was my introduction to punk rock and, more broadly speaking, to rock music as something relevant to the world in which I’d grown up in. One of my earliest memories was of my father staying home from work because of the riots during the 1968 Democratic Convention in Chicago. When I saw Super Black Market Clash
in a record store, with its grainy photo of a lone rioter confronting a phalanx of police, it seemed to have come directly from my own image repertoire.

The best parts of Julien Temple’s latest punk rockumentary Joe Strummer: The Future Is Unwritten draw on the image repertoire from the Clash’s heyday in the late 1970’s and early ’80’s, the second to last time rock was at the forefront of cultural change. (The last was the emergence of grunge in the 1990’s.) Temple recreates that charged and despairing time with clips of the Clash rehearsing and performing in coon skin caps. We watch Joe Strummer riffing on the decay around him: pointing to a man passed out against a wall, Strummer proclaims, "And that’s the man who invented punk rock! . . . I guess it was too much for him." Some of the images don’t make much sense, such as scenes from a cartoon version of Animal Farm and an appearance by Johnny Depp. Others take a moment to register: That guy looks vaguely like Bono. Oh, it is Bono!

The worst parts of the film, or the least satisfying to watch, have to do with the breakup of the Clash. Temple’s improvisatory, juggling-six-reels-of-film-at-once visual style has the unexpected effect of making the band’s demise seem inevitable, and this is the most troubling part of the film. "We became exactly the kind of people we were rebelling against," Strummer laments. How? Why? Did they really succumb to the usual narrative of rock and roll decline into drug abuse, hubris, and petty squabbles? If the Clash couldn’t sustain a politically committed popular art, who could?

After the Clash chapter in Strummer’s life, the film loses some of its energy and settles into an elegiac tone as Strummer tries to find his way back to the spirit that made rock matter. We get to know him as a kind of Bruce Springsteen as a good bloke. His post-punk band, the Mescalaros, was well-intentioned and not without some moments of brilliance, but they lacked the elan of the Clash. It’s moving, and sad, to watch Strummer drift into middle age as recounted by the fringe players in the rock and roll life. The people who gather fireside to remember Strummer are nice enough, and the image of Strummer they create is appealing, but one is troubled by their irrelevance to Strummer’s larger ambitions. "I guess it’s called adulthood," A.O. Scott says of Strummer’s final days. Maybe he’s right. Punk rock was a dead end, but I like to think that somehow the Clash escaped the trap punk rockers set for themselves. We need a politically-committed popular art form that can’t be dismissed as youthful nihilism.