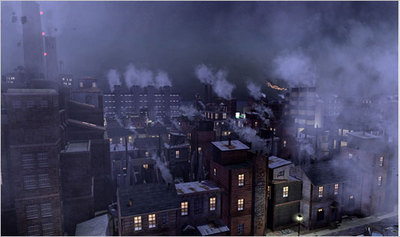 Back when I had spare time–i.e., before I had children–I sometimes played SimCity. As the game grew more realistic with each edition, SimCity grew more engrossing and more frustrating. I became exasperated with my lazy Sims’ refusal to walk more than a couple of blocks to see a doctor. I proved to be as inept at managing city budgets as I was at managing my own budget. Whenever a coal-burning power plant collapsed in a toxic heap, I was invariably short of funds to build a cleaner one to replace it, forcing me to raise taxes during brownouts. My department heads were supposed to help me avoid this sort of problem, but their contradictory, at times nonsensical advice induced the same sputtering incoherence as Mayor Daley is exhibiting these days. I kept playing, though, spurred on by the game’s combination of whimsical humor and authoritarian power.  The feeling of omnipotence is a nice complement to the cloistered effect of being on a PC for long periods of time.

Yesterday Electronic Arts launched the latest edition of the SimCity franchise, SimCity Societies. SimCity has always included pollution as a factor in its games, but it’s never been as important as placing a health clinic on every corner. The latest version ups the environmental ante, making environmental factors like rising sea levels a much more important element in the game.  Because the game was created in eco-friendly San Francisco, you can bet you’ll have to disperse windmills throughout your city and make sure your waste water is recycled, or you’ll hear plenty of loud complaints from your Sims–and Sims are a cranky lot. Supposedly, in this edition Sims can be induced to walk to work, but in my experience Sims wouldn’t leave their houses if you issued them flying carpets.

If you can stand the whining, I would think creating a putrid metropolis would be most people’s first impulse. The temptation to hasten global disaster is all part of the pleasures of apocalyptic thinking. The Western tradition is rich with apocalyptic brooding, and that strain of thought is just below the surface of some neo-conservative and Christian fundamentalist rhetoric. For this reason one would think these people would have been among the first to embrace Al Gore’s message about global warming. Anyway, as any veteran of SimCity knows, after one has completed the sewer system and built the airport, you start to hope for a tornado or an alien attack to give you an excuse to clean up some of the less successful parts of your city. (Sims never die, but their houses burst into pieces very elegantly.) In short, disaster is all part of the pursuit of social perfection.

It’s interesting that the game makers continue to carefully limit themselves to a single city, even when playing with global ecological disaster. A player is polluting one small corner of the earth, or constructing an oasis so rigorously green you can drink out of sidewalk puddles. This seems entirely consistent with our current approach to global warming: the solution rests solely in personal consumer choices; we’re not going to force our national politicians to do anything about it, no matter how many hectoring columns Thomas Friedman writes. I once played the SimCity franchise’s first foray into eco-politics, SimEarth. The game wasn’t successful, in part, because of the totalized nature of the game. The Gaia theory upon which the game was based dictated that one oil spill meant your whole planet was doomed, and, since there were no department heads to blame things on, it was your fault alone. It was despairing. On the other hand, the rewards for keeping a healthy planet weren’t exactly obvious. In my ecologically sound world, antelope munched on grass. Rabbits hopped around. It was boring. I longed to create one fetid corner of my world–one Gary, Indiana in paradise, just to keep things real.

SimCity Societies may end up teaching us the limits of our desire to clean up our world. Speaking for myself, I have a limited capacity for good acts that don’t have an immediate payback. I’ve noticed, for instance, that the more I recycle the less I floss. If I buy the game and use up my thirty minutes of free time a week while both my children nap, I know I’ll probably create a low-tax sinkhole and try to distract my Sims with stadiums and plenty of health care clinics. And this time I’ll ignore my department heads.