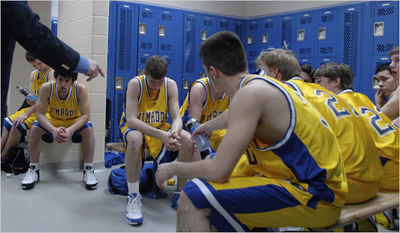 I can think of few places more unprepossessing than Watersmeet, MI. And yet, the town has already experienced fifteen minutes of unlikely fame thanks to some ESPN ads, which led to a brief vogue for Nimrods tee shirts and sweat shirts–the Nimrods being the nickname of the local school’s sports teams.  Starting tonight Watersmeet gets another shot at fame with Brett Morgen’s Nimrod Nation, a week-long documentary series on the Sundance Channel. The series’ website promises "a unique experience of a very different America." Clips from the series show lots of snow, determined basketball players, and picturesque rustics opining on matters ranging from the trivial to the insignificant. Watersmeet is Lake Woebegone with low production values, its one-liner fame extrapolated into a metaphor for small town America.

As it happens, my family has a summer cottage in Watersmeet Township, albeit just barely: the access road runs from Land O’ Lakes, WI, but the state line runs along our property line. Watersmeet is where we go to dump our garbage. We’ve been to its Indian casino once, and I won forty bucks, which I blew on ice cream–in Land ‘O Lakes. We used to go to a Watersmeet truck stop that served an excellent breakfast until, like a lot of Northwoods businesses with too much overhead, it burned to the ground shortly after the summer season concluded. The documentary’s website claims Watersmeet is an "outdoorsman’s dream" with 302 lakes (this number includes Lac Vieux Desert, which is actually miles away in Wisconsin), 241 miles of trout streams (mostly dried up because of an extended drought), and 1,478 citizens, mostly Finns and Indians with no use for summer residents from Illinois.

Throughout film history, filmmakers have been depicted small towns as repositories of traditional values that the urban and suburban bourgeoisie have forgotten. The structural opposition is simple: Small towns never change, while big cities are in constant flux. Morgen’s images of portly men in flannel, pale cheerleaders, and snow-bound basketball courts are straight out of 1950’s America. It will be interesting to see if Morgen also captures the sense of permanent economic peril in which the town lives.  Businesses change hands or shut their doors seemingly overnight. Or they simply go up in flames. (The local firemen know the drill; they rarely bother trying to extinguish the fires). The only enterprise of any scale and sense of long-term investment is the Indian casino. Even the gas stations have a high turnover, and with pumps scarce in the area and lots of gas-guzzling trucks around, you’d think that would be the one sure bet in the region. The fishing guide and resort business disappeared a long time ago. The lakes are all fished out. Poor snowfalls over the last few winters have nearly wiped out the snowmobiling economy. Logging still exists, but it’s not very profitable. The locals hunt deer less for sport than for sustenance; a bad hunt can mean a family really struggles to make it through the winter. Watersmeet Township is mostly low-end service industries now: hair salons and small motor repair, with the occasional antique shop popping up for a brief existence. In an attempt to cash in on the recent real estate boom, two real estate agencies set up shop in town to sell second home property to weekenders from southern Wisconsin and northern Illinois. Low lake levels, meager snowfalls, high fuel costs, and tight mortgage lending will probably doom that effort.

Brett Morgen, the director of the lively documentary The Kid Stays in the Picture, has stated that he tried to let the locals tell their own stories in Nimrod Nation. He wanted to avoid the melodramatic turns that documentaries tend to take in favor of something "a bit more lyrical and poetic." Watch tonight to see if he avoids another filmic cliché: the small town as a bastion of enduring moral values, just waiting for the troubled suburban bourgeoisie to pack up the SUV and head for the woods. But they better hurry before the woods go up in flames, too.