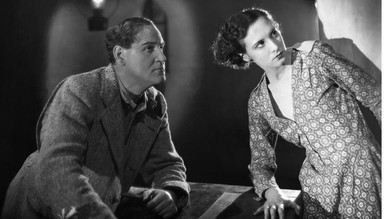 I have a day crammed with meetings, but I wanted to call attention to today’s edition of Dave Kehr’s "New DVDs" column, which features the Kino International release of Anthony Asquith’s 1929 silent, A Cottage on Dartmoor. I can’t resist a chance to plug silent movies, one of the last unexplored frontiers for many cinephiles. Silent films require some adjusting in one’s viewing habits, but when silent films are met on their own terms, they can be mesmerizing. The late silent period was especially poignant as filmmakers perfected a form of art that they knew would vanish with appearance of the talkies. As Kehr writes,

The late ’20s was still a time of transition for the movies, when no
one knew with certainty whether sound would vanquish silent drama or be
used mainly to present canned music and vaudeville acts, though many
filmmakers, Asquith apparently included, believed that silent
storytelling had reached such a high level of refinement that mere
chatter would never be enough to extinguish it.

This, of
course, was not to be, but “A Cottage on Dartmoor” provides ample
illustration of how elegantly and assuredly expressive silent film had
become, and how hard it must have been to believe that this magnificent
medium, then just over 30 years old, was doomed.