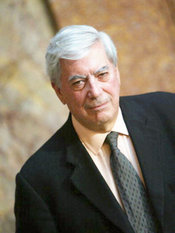 The good boy-bad girl theme has already appeared in one major novel this year–Junot Diaz’s The Brief Wondrous Life of Oscar Wao–and now it appears in another one, Mario Vargas Llosa’s The Bad Girl

. And while these novels couldn’t be more different in tone, both use malevolent fate as a major thematic and plot element. In Oscar Wao it’s known as fukú, while in Bad Girl it takes the form of Flaubertian Naturalism.

The bad girl of the novel’s title is known by a variety of names, one of which is Madame Arnoux, a not-so-subtle reference to Flaubert’s Sentimental Education, another story of a doomed love set in a time of political and cultural turmoil. Vargas Llosa’s Boveryesque fascination with Flaubert is well known. Vargas Llosa even wrote a book about his obsession, The Perpetual Orgy. Vargas Llosa and Flaubert both have a rage for the real. They both want desperately to create worlds in order to dramatize their own refusal to participate in the real one. But as a writer, Vargas Llosa is no Flaubert–Vargas Llosa’s sentences lack the French master’s crispness, he doesn’t have Flaubert’s unwavering faith in art, and his women just aren’t as sexy as Emma Bovary or Marie Arnoux. Vargas Llosa tries to emulate Flaubert’s pitilessness and can’t pull it off. He’s too grumpy.  This makes for a novel that’s warmer than any of Flaubert’s major novels, but one that’s imbued with a sense of artistic retreat.

The Bad Girl begins in 1950 with the appearance of the proto-Emma as a fifteen-year-old flim-flam artist, a poor Peruvian girl trying to pass herself off as Chilean. Ricardo, the narrator, falls instantly in love with her, but she keeps her distance, partly to preserve her own mystique, and partly because he’s too much like her. Ricardo is an orphan, while the bad girl might as well be. Both escape Peru as soon as they can to set off on a journey of self-definition. Ricardo settles in Paris and becomes a translator for UNESCO and other world government agencies. The bad girl sniffs out the most rakish men she can find and marries them. Her husbands range from a suave French diplomat to a Japanese gangster. I half expected her to show up as Mick Jagger’s wife. Between marriages she returns to Ricardo for some high-toned booty calls that leave him as miserable, and as clueless, as ever. For the sin of disavowal of his desire–the bad girl is merely a substitute for some other desired object, perhaps a more vivid being of his own–Ricardo suffers the punishment of the damned: the repeated frustrations of the exact same desire. The bad girl, for her part, succeeds more than her countryman because, like Emma Bovary, she knows that the preservation of one’s own desires can be an end in itself, but at the price of hastening one’s death.

Sartre once said, "Freedom is what you do with what’s been done to you." The central couple in The Bad Girl are flung out into the world without the stable identities of traditional cultures. From the arrival of the mambo in Lima In 1950 to the drugs and promiscuity of Swinging London of the 1960s, cultural history appears in the novel like a force of nature: trends manifest themselves out of nowhere and then fade away. Ricardo and the bad girl regard the cultural changes like crafty provincials, appropriating what they can use, whether they understand it or not. And yet, at a deeper level, the old paradigms of errant feminine sexuality and repressed male idealism work to nail the Peruvians to their fates. They are free, but only to fail.