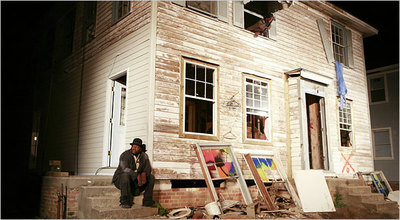 Among the awful things that has happened to New Orleans since Katrina is that its culture of pleasure-seeking has turned into self loathing. The Big Easy has become a cauldron of resentment and recrimination. It’s in this atmosphere that the artist Paul Chan decided to stage Samuel Beckett’s  Waiting for Godot amidst the ruins of the Ninth Ward. With three actors from the Classical Theater of Harlem, including The Wire‘s Wendell Pierce, Chan’s production concluded last month to much popular success, and not just because the performances were free. Chan, however, remains in New Orleans, where he continues to teach in the local schools as part of a deal he reached with community leaders.

The New York Times’ Holland Cotter describes Chan as someone "who is well known to the international art world for his video animations of paradises embattled and lost, and to law enforcement officials for his activist politics." The wording is careful. Chan isn’t a political artist. Rather, he’s an artist who involves himself in political activism.

A canny tactician, Mr. Chan insists that his art and his political work run on two separate, possibly conflicting, tracks. Political action is collaborative, goal-specific and designed for power, he maintains. Art, by contrast, is individually produced, ductile in meaning and built to last. It is the opposite of ideologically instrumental; it is made to melt power.

Chan’s Godot production recalls the efforts of another artist activist, Rick Lowe, who runs Project Row Houses in Houston. Both Chan and Lowe acknowledge that artistic practice, by itself, isn’t necessarily political even when the artist intends it to be so. We may be entering a new age of political art in America in which personal artistic expression is no longer sufficient to achieve political ends. Artists like Chan and Lowe are forging a collectivist politics by working with coalitions of community leaders, local governments, political organizations, and ordinary citizens.

Collectivist politics have had a checkered past in the United States. Since the Second World War, American art has struggled to find a middle ground between American exceptionalism on the one hand and an international standard of aesthetic legitimacy on the other. One way out of this conundrum was Abstract Expressionism.  Although Expressionism had been conventionalized in the European avant-garde after the collapse of the Weimar Republic, in the post-World War II era the events of history had become so overwhelming, and the force of state control so total, that avant-garde artists once again turned into radical expressions of the self in response.  By the 1950s collective politics of the kind we’re seeing now had been discredited by their association with Soviet communism and socialist realism. The power of individual artistic protests can be seen in Chan’s choice of plays to stage in New Orleans: Waiting for Godot, one of Beckett’s bleakest portrayals of existential solitude.

We’re clearly reconsidering collectivist politics during a time of liberal optimism at the collapse of neo-conservativism, signified by the devastation of two old cities, New Orleans and Baghdad. The extreme political futility in the face of what’s happened in New Orleans seems to open the door for different kinds of political responses, but even seemingly more direct interventions may not be as transformative as we would like. Among other challenges, collective politics may run aground on our entrenched  habits of talking about politics in terms of ruthlessly self-interested special-interest groups.  Collective political forces are now subject to the same gaffes and narrow agendas as individual candidates — or demagogic political commentators like Rush Limbaugh or Ann Coulter. One recent baleful example of a grass-roots political force getting lumped in with all the other braying political action committees was MoveOn.org’s infamous ads during the Patreaus hearings last September.

Performing Waiting for Godot in New Orleans should be a piquant political commentary in and of itself.  That a bleak existential comedy should find a perfect stage in the real world of a ruined American city should be sufficient to shame power into changing its course of action.  However, we are now so invested in political polarities that what strikes one person as an egregious violation of fundamental humanist principles can appear to another as a routine bit of partisan gamesmanship.  So, curiously, in order to complete his political gesture Chan was obliged to do something that supposedly politically disenfranchised academics are asked to do routinely: teach a few classes, give a few lectures.  This is the price that the artist needs to pay in order to make a political gesture in 2007.