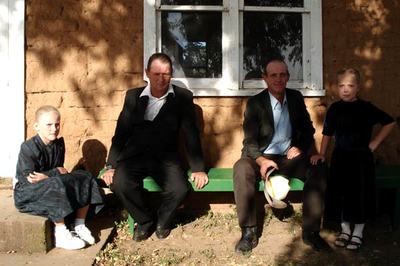 The impassioned Mexican director Carlos Reygadas issues a series of maxims about the cinema to the Guardian‘s Phil Hoad. The occasion is the London Film Festival screening of Reygadas’s new film, Silent Light, which played at Cannes earlier this year. His more famous countryman Alfonso Cuarón has the gift of connecting immediately to his audiences, regardless of his material. Reygadas’s films, on the other hand, have been received with respectful bafflement. His best known films are Japón (2002), a desert miserablist tale of a man who moves to a small village with the intension of committing suicide, and Battle in Heaven (2005), about a couple who kidnap a baby for ransom, only to accidentally kill the child. In Silent Light Reygadas shows off his trademark moody long takes, starting with a six-minute opening shot of a sunrise. The effect is either mesmerizing or pretentious, depending on who you ask. Reygadas loves his camera more than his scripts, so he’s found himself a picturesque tale in Silent Light: a married farmer living in a Mennonite community in Northern Mexico has an affair with a woman in the same community. Imagine Witness directed by Lars von Trier or Carl Dreyer.

Like von Trier, Reygadas has a very specific set of beliefs about cinema. He doesn’t like Godard ("His films are just essays trying to prove a preconceived theory"), films for children ("I don’t understand why so many people understand films for children"), or films that place cinematography at the service of story ("The photography is the film itself; it’s not a vehicle for the story."). He likes non-professional actors ("So if you have Brad Pitt doing the Mennonites, you cannot stop seeing Brad Pitt.") and demands his cast and crew commit themselves totally to the filmmaking process, even when there a lots of snakes around.

One could quarrel with some of Reygadas’s assertions. Godard, for instance, was also trying to discover a pure cinema. In fact, Reygadas is an absolutist to the same degree, and on many of the same issues, as Godard. Picking on the Harry Potter films and Lord of the Rings is unfair. Yes, the chronic shortage of American films made for grownups is an ongoing problem, but there’s a vast middle range of  R-rated Hollywood films made for the emotionally stunted. Even this fall season when we have a rare surfeit of films aimed at adults, movies like Hitman are still hogging up screens across the country. Judd Apatow is the problem, not J.K. Rowling. And while I love a good long take as well as anyone, I take issue with the belief that it’s the very essence of cinema. For all his talk about setting the cinema free, Reygadas places editing at the service of photography.

Still, Reygadas’s unguarded passion for the cinema contrasts sharply with American independent directors who confuse post-irony with real feeling and artistic daring.  Reygadas’s films aren’t without their excesses, but it’s exciting to watch a filmmaker work on the high wire of clear and uncompromising ideas about the cinema.