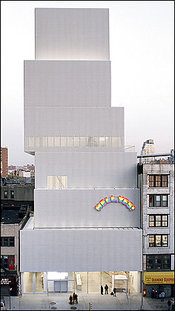 Tomorrow or Wednesday I’m going to try to get down to South Michigan Avenue to look at the Spertus Institute. One question I have is if the new building’s crinkled façade is just a pretty face on an otherwise conventional box. The same question is being asked about the New Museum of Contemporary Art in Manhattan, another recently completed museum of similar size. Designed by the Tokyo-based architecture firm Sanaa, the New Museum is one of those buildings that almost looked better under construction than it does completed. The building is a stack of boxes piled slightly askew, like a children’s block set. Some people have had quite enough of playful façades that look like they’ve been designed by a seven-year-old working with a Backyard Architect program. The Washington Post‘s Philip Kennicott comes to the defense of the Sanaa design, asserting

the New Museum in New York works, and it works in part because its basic form suggests not just playfulness, but something supernatural as well. A mix of those two elements, an amalgam of brattiness and transcendence, silliness and the spiritual, would pretty much describe where the contemporary art world spends much of its time these days. By posing as something either built by God’s hand or by the hand of a prattling child, the New Museum manages something surprising for a building sandwiched into a relatively small space in an old neighborhood: It seems monumental.

While it may seem monumental despite its modest height of 174 feet, the eye-catching exterior isn’t structural; the New Museum isn’t six separate buildings. Inside, it’s organized more or less conventionally as a single unit hugging a concrete core, although the core itself is offset. That the exterior doesn’t mirror the interior violates a moral imperative to make the exterior of a building reflect its internal structure and purpose. Kennicott counters by appealing to both traditional architectural standards (monumentality) and a more conceptual standard: that architecture should reflect a state of mind, a condition of being.

This latter standard isn’t the familiar modernist celebration of technology as the essence of the modern. It’s more like a Heideggerian Andenken, or recollection of the history of modernity considered more critically the second time around.  The Sanaa design is aggressively modern, even confrontational, but it also expresses a certain dismissive attitude about the development of art, an attitude shared by many outside observers of the New York art world. The New Museum is located in the center of the global market for art, where paying millions for a bratty artwork is a very unsilly thing to do. The new New Museum perfectly captures our attitude about contemporary art: it’s absurd, but it’s an absurdity of our own making.