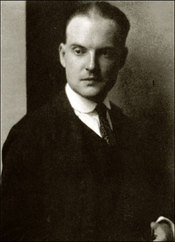 Edmund Wilson enjoyed a professional life many English professors would love to have lived, but he rarely, if ever, makes it on to History of Literary Criticism syllabi. Wilson wrote on anything he wanted to write on, in exactly the ways he wanted to write about them. He had the good fortune to come of age during the flowering of literary high modernism, and part of the pleasure offered by the new Library of America editions of Wilson’s work is reading a first-hand account of American modernism as it unfolded. The first volume of the Library of America set opens with a remarkable essay on F. Scott Fitzgerald, written in 1923. Fitzgerald had just published This Side of Paradise; The Great Gatsby and Tender Is the Night were still ahead of him. Wilson begins his review with invective worthy of Dale Peck. Wilson comes close to calling his fellow Princetonian a functional illiterate and proclaims, "He has been given imagination without intellectual control of it; he has been given the desire for beauty without an aesthetic ideal; and he has been given a gift for expression without many ideas to express." Then, in a characteristic turn, Wilson tells us that Paradise "commits almost every sin that a novel can possibly commit; but it does not commit the unpardonable sin: it does not fail to live." That last assertion, "it does not fail to live," would be greeted with incredulous laughter in an MLA session, but Wilson’s evaluation of Fitzgerald’s prospects as a novelist was dead on.

Wilson also had prescient things to say about Wallace Stevens and e.e. cummings, although he used a critical language closer to belle lettres than to post-structuralism. He’s irritated by cummings’s mannerisms (as I’ve always been), but his overall assessment of cummings’s style is odd: Wilson says the broken lines and lack of punctuation appear "ugly" on the page. Wilson was an early champion of Ernest Hemingway–so early, in fact, that he’s disappointed to discover that he wasn’t the first American critic to review Hemingway’s work. In his later life Wilson turned into a cranky misanthrope, but in the 1920’s he was still susceptible to a celebrity worship. He pads his first writings on Hemingway with long quotes from letters Hemingway sent him thanking him for the early notices and promising to look him up the next time Hemingway was in New York. It’s characteristic of Wilson to be star struck even before the novelist was a star.

We can’t return to writing like Wilson did in the Twenties and Thirties. Only a person who had a nineteenth-century education in the classics written in dead languages would demand a novel have life. His highly opinionated and deeply felt responses to literary works have more in common with bloggers than professors–or newspaper book critics, for that matter. Reading the early Wilson is like an RSS feed from a blogger keenly attuned to an incomparably rich literary culture. He wrote with the blogger’s freedom from institutional constraints with the man of letters’ confidence he embodied a shared sense of aesthetic and ethical values. When literary modernism went into retreat after World War II, Wilson lost interest in contemporary writing, turning instead to the nineteenth-century literary culture of his youth. Consequently, his later writings failed to live.