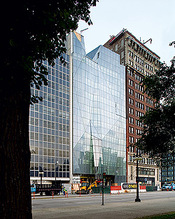 The Spertus Institute of Jewish Studies is a flirty newcomer to one of Chicago’s most architecturally significant neighborhoods. Designed by local architects Ron Krueck and Mark Sexton, the Spertus is located on South Michigan Avenue at the nexus of some of Chicago’s best contemporary designs and its best designs from a century ago. From the Institute you can see Anish Kapoor’s Cloud Gate and Jeanne Gang’s Aqua Building, currently under construction. Frank Gehry’s uneven Pritzker Pavilion and BP Bridge are also within eyesight. More proximate are the "streetwall"  buildings of the Historic Michigan Boulevard District, with important examples by some of Chicago’s first starchitects, including Louis Sullivan, Daniel Burnham, and Holabird & Roche.

There’s no overt iconography or anything else to mark the building as specifically religious, or, for that matter, as particularly studious. In fact, the Spertus wears its religiosity so lightly that it’s staging an exhibition of what it calls "Post-Jewish" artists. On the other hand, the building offers a kosher café. (I didn’t have a lot of time, so I didn’t visit either the art exhibit with the perplexing title "The New Authentics," or the café.)  Like the New Museum of Contemporary Art in New York City, the Institute’s three main divisions–Spertus College, the Spertus Museum and the Asher Library–are simply stacked on top of each other, like a department store. And also like the New Museum, the Spertus has an enigmatic façade with a paralogical relation to what’s going on inside the building.

On the day I visited the Spertus Institute, its computer-designed crinkles reflected the frigid mists on the trailing edge of an ice storm. Most other days the building’s intricately folded glass front would certainly be more alluring. When the skies are clear this section of Michigan Avenue, which is open to Grant Park and the lake, is infused with an almost Tuscan glow caused by the reflected light of the streetwall buildings and the particulate matter hovering in the air.  The Spertus’s façade looks softer and more organic in person, and less like a crumpled beer can. The three-dimensionality of the front echoes, in a slyly intelligent way, the muscular rhythms of proto-modernist buildings around the Institute.

Step inside the building and one is confronted with the mixed messages one expects to see in a cultural institution nowadays: both welcoming (a gift shop and that kosher café) and foreboding (metal detectors), culturally rarified and frankly pragmatic. This loaded space flows upwards for three stories. The lobby would have extended to the roof if the Chinese hadn’t scarfed up the world’s supply of building materials. Without a soaring atrium the lobby welcomes you in the same way an office tower lobby does: distilling the urban space outside so you can get your bearings and find the elevators. It’s a palliative experience–and in a lot of office towers the only humane gesture you’ll encounter–but it’s not one you’d bother to examine too closely. Perhaps mourning the lost atrium, the architects carved the exterior’s jaunty parallelograms on the far wall, a nice if predicable effect. More intriguing is the switchback stairway.

The Spertus pays tribute to the great architecture around it while boldly announcing itself as the harbinger of better things to come.  Krueck and Sexton’s deft act of contextualization neglects only one element: the building should have some sort of body piercing or tattoo in honor of the scruffy art students who live and work in the area. I’d like to return one sunny day when I have enough time to explore the upper floors and peruse the art exhibit to see what the new authenticity is all about.