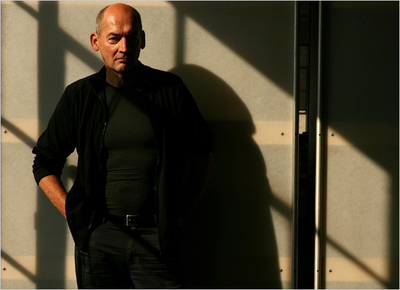 The recent phenomenon of the starchitect has made the profession of architecture critic more interesting, and maybe a bit more glamorous, so it’s little wonder that Nicolai Ouroussoff wrote a piece in last Sunday’s New York Times Week in Review section defending the starchitect system. Ouroussoff argues that starchitects are, on balance, a good thing for architecture. Critics of the starchitect system complain that architects’ shameless self promotion and Faustian bargains with large-scale commercial developers compromise the profession’s artistic integrity and its connection to ordinary people. Ouroussoff reminds us that Renaissance artists knew how to hustle their skills, and commissions from major developers have allowed esoteric architects like Rem Koolhaas (photo above, taken by Robert Caplin for The New York Times) and Zaha Hadid to put aside their purely theoretical designs and actually build things.

Ouroussoff knows as well as anybody that overextended starchitects don’t always produce sparkling wonders (see Frank Gehry’s widely panned building at MIT), and he agrees to a certain extent with critics who charge that starchitects create buildings that exist primarily to call attention to themselves rather than serving humdrum needs like providing usable office space.  Ouroussoff provides his own example of Santiago Calatrava’s "overblown" PATH station at the World Trade Center site, a curious position. When the design came out, I remember it being lavishly praised in the New York Times, among other places, as the only genuinely great design proposed for the site. (Speaking of which, where is the new World Trade Center? How’s that Freedom Tower coming along?)

Except for his comment on the PATH station, I agree entirely with Ouroussoff. Architects don’t have bigger egos than they used to; it’s that the people who hire well-known architects have finally figured out that a famous name is an excellent marketing tool, something art gallery owners have known for a long time. However, reading Ouroussoff’s description of the starchitect system I was reminded of the academic star system in cultural studies during the 80s and 90s. Theory, as it was generally referred to, consisted of the central trilogy of Jacques Derrida, Jacques Lacan, and Michel Foucault, with a second tier of French thinkers: Barthes, de Man, Baudrillard, and Deleuze and a few others.  Radical in intention and formidably complex in expression, these thinkers inspired many imitators and exasperated a generation of graduate students. But once this generation of theorists died out–they were remarkably short-lived–a new generation of star theorists didn’t take their places. This isn’t to say there aren’t a large number of highly intelligent and insightful academics working today, but they don’t have the same star power as the great French theorists. The reasons for the decline of theory and its star system are complicated and still under debate. Maybe the humanities are leaning toward more democratic arrangements.

Many of the starchitects Ouroussoff mentions are men in their 60s and 70s. This group of architects won’t be with us forever, and while there’s no shortage of creative architects under age 60, one shouldn’t assume that they will become starchitects with the international profile that Gehry, Nouvel, and Calatrava currently enjoy. Only one star system has lasted longer than a generation, and that’s the Hollywood star system, which was in place by the 1920s. However, unless architecture as a profession is willing to commit itself to a star system to the extent the American film industry has, it’s entirely possible that ten or twenty years from now starchitects will be remembered only in an elegiac tribute by a nostalgic critic. Call it Eminent Postmodernists.