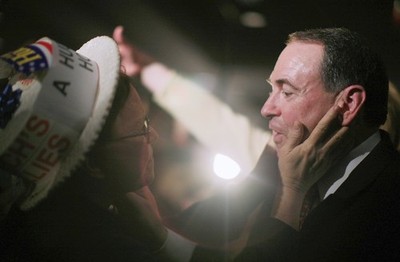 Part of life in an uncontested blue state like Illinois is that you’re reduced to being a spectator in the national political process until Election Day. So at this point I can do little more than root for Barack Obama to win. His victory in Iowa means everything or nothing at all, depending on which pundit you listen to, but it could turn out that I’ll be able to vote for a Democratic candidate for president without ambivalence for the first time since 1992.

Meanwhile, the cornpone populist minister from Arkansas won the Republican caucus. With the exception of John McCain, all of the messages the Republican candidates sent were disturbing, and Huckabee’s may be the most disturbing of all. All the GOP candidates are running away from the current incumbent, but they’re sneaking some of Bush’s rhetoric in the back door. Huckabee seems to have laid claim to Bush’s rhetorical strategy of speaking in barely veiled allegorical terms to Evangelical Christians. This approach is Bush’s only sophisticated form of public address. The New Yorker‘s Hendrik Hertzberg spots the same strategy in Huckabee:

Huckabee’s sensational rise has been made possible by his success, so far, at speaking in tongues that evangelicals and non-evangelicals understand differently. "I always tell the story of a lady who asked me, was I a narrow-minded Baptist who thinks only Baptists go to Heaven?" he likes to say. "And I told her, ‘No, ma’am, I’m more narrow than that. I don’t think all the Baptists are going to make it, either.’ " Does he mean "Let’s not take this eternal damnation stuff so darn seriously"? Or is it "Everybody roasts in Hell except selected evangelicals"?

This interpretive ambiguity, as subtle and complex as anything in T.S. Eliot, is enough to catapult someone into the presidency, as we’ve learned. The thought that we’d get another fundamentalist Christian president–even after the current one proved to be a corrupt, delusional moron–is unsettling, to say the least. The rhetorical first cousin of speaking in tongues is bullshitting, and for the last seven years we’ve been saddled with a world-historical bullshitter.

You have done what the cynics said we couldn’t do. You came together as Democrats, Republicans and independents to stand up and say that we are one nation, we are one people and our time for change has come.

For liberals, "change" is a code word for running the entire Bush-Cheney crew out of Washington and back to Texas–preferably back to a federal prison in Texas, or better yet, some sort of divine retribution. (Believing in God isn’t a prerequisite for holding this desire.) Presidential candidates are famous for speaking in vague generalities so that we may fill in the details with our own hopes and desires. Most of what the Democrats are saying is meant to be interpreted as "let’s erase the last eight years." It’s just another allegory.

What sets Obama apart, though, is that his message is so asymmetrical. The Republican correlate to "change" is "so far so good on the domestic terrorism front." There’s a whole army of sinister operatives ready to pounce if Clinton emerges as the front runner, but the right has no counter message for an Obama candidacy. The few attacks I’ve heard on him from conservatives have been laughably off the mark. Maybe Obama’s free ride so far reflects the current state of prejudice in which it’s OK to be misogynistic but not racist. Or maybe when Obama says "our time for change has come," he’s actually tapping into a desire for change in the electorate at large.