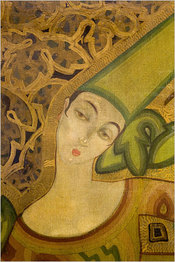 Richard Driehaus, a Chicago investor, is an evangelist for outmoded design styles. He’s best known as the money behind the Richard H. Driehaus Prize for classical and traditional architecture, awarded to the architect who can best ignore the last 120 years of architectural history. The most recent winners were Miami architects Andres Duany and Elizabeth Plater-Zyberk, founders of the New Urbanism movement.

Next spring Driehaus will open the Richard H. Driehaus Museum of Decorative Arts in the in the Nickerson Mansion, a brooding Italianate mansion marooned in a neighborhood of anonymous condo buildings and cheesy tourist traps. As a preview of sorts Driehaus gave Robert Sheroff of the New York Times
a tour of his house a few blocks away from the museum. Standing in his 1887 Queen Anne mansion, Driehaus proclaims, "Modern architecture has become totally homogenized and uninteresting. We’re losing our sense of who we are, how we developed and where we’re going. One streetscape in Prague is worth all of Dubai, visually."

He’s certainly right about Dubai, the world’s first fully surreal city. And if all he sees of Chicago is the few blocks between the offices of Driehaus Capital Management on East Erie Street and his house near Lake Shore Drive, then he has a point about Chicago as well. That patch of the city is as affluent as it is architecturally vapid.  But in the context of the architectural scene in the city as a whole, his statement is startling at best and disingenuous at worst. The most homogenized and uninteresting architecture in Chicago is being built in its gentrifying neighborhoods, where low-rise condo buildings run the gamut from workmanlike vernacular to wretched eclecticism. On the other hand, there have been a number of recent buildings created in the city’s modernist tradition of fusing technology and form. The most recent example is Ron Krueck and Mark Sexton’s Spertus Institute of Jewish Studies, a brilliant reinterpretation of the transitional modernism of Sullivan, Root, and Burnham. The Spertus Institute is just one example of a return of daring and genuinely creative architecture in the city.

As for Driehaus’s Victorian pile, Sheroff puts it as nicely as he can, calling it "overtly theatrical." The house is an exercise in rococo eclecticism. Besides reflecting the prima donna impulses of its owner, the guiding principle of the house is turn-of-the-century neo-classicism, a period that saw the first flowering of architectural modernism in Sullivan’s Auditorium Building and Root’s Monadnock, as well as the first anti-modernist backlash in everything from Jungenstil to the 1893 Chicago World’s Fair. Driehaus’s house is less a showcase for haute bourgeois style than an obsessive return to a traumatic moment in history. The house isn’t quite the oppressively opulent Second Empire style that Walter Benjamin saw as the expression of a reactionary bourgeois consciousness, but Driehaus has a taste for a theme Benjamin saw in late nineteenth-century European culture. The house abounds in images of petrified nature, from the Baccarat chandelier to a bronze bust of the 19th-century French actress Rachel. As a cultural form, petrified nature was dialectical in that it expressed a desire to arrest progress and, at the same time, retrieve a forgotten image from the past so that it may become real in the future.  It’s interesting to note that the centerpiece of the house is the most overtly modernist: its two-story Art Deco living room. The rest of the house reflects the desires of a bourgeoisie that wants to feel at home anywhere in the world. For a wealthy Chicagoan stranded at the edge of the prairie, that also meant forging a cultural connection to Paris, which Benjamin called the capital of the nineteenth century.

Despite Dreihaus’s implacable resistance to modernism–to the century in which he’s lived most of his life–his alternative is incoherent. His 21st-century neo-classicism re-enacts the revivalist wars of the nineteenth century. One resolution of those battles between the revivalists was Chicago’s fusion of  vernacular styles and emergent technology. Before the 1890’s, the city was a mix of crude wood frame houses and equally crude copies of European styles.  Surely Dreihaus doesn’t want to return to this rough-hewn period in the city’s history. His house is a wish image for a culture we never had to begin with.