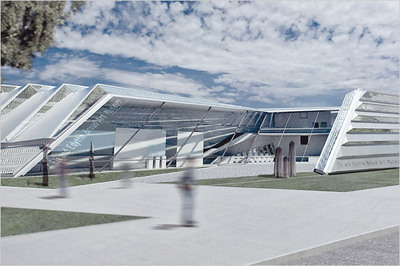 Every designer knows the phenomenon of the three proposals: the first is a radical one that the customer is too square to pick but shows off the designer’s creative chops; the second is a watered-down–but more fully realized–version of the first that the customer is supposed to pick; and the third is the tamest, and lamest, design concocted mostly to prove that the customer has no taste whatsoever. Much to the dismay of the designer, as often as not the client usually chooses design number three. Sometimes design two is chosen, but the first design isn’t even supposed to be picked because it’s sketchy on the details of how the thing will be made.

But Michigan State University seems to have picked the first one.   Yesterday the university announced that it had chosen Zaha Hadid to design the Eli and Edythe Broad Art Museum on its campus in East Lansing. According to Eli Brand, who donated money for the project, Hadid was chosen because she presented the "most innovative design."

This explanation is just for a newspaper, so it doesn’t fully reflect the thought process behind choosing Hadid’s proposal. Nevertheless, the idea that a design should be chosen primarily because it was the most innovative raises some questions, especially considering the backlash against the starchitect phenomenon. Was her design chosen because it would look striking in a brochure?  Was it chosen because it was the architectural equivalent of the cinematic aesthetic of distraction, which tries to hold the attention of a distracted viewer through splashy special-effects and quick editing? Or was there something properly Kantian going on here?  Is her proposed building an object that is a sensuous idea, a harmonious object that is nevertheless irreducibly itself?

What’s clear, however, is that the university was serious about commissioning a distinguished piece of architecture. It couldn’t have been easy choosing one proposal from the likes of Hadid, Morphosis, Coop Himmelb(l)au, Kohn Pedersen Fox, and Randall Stout Architects.  Hadid is a brilliant architect, to be sure, and she’s already produced one intriguing design for a university trying to raise its profile. Hadid has always seemed like she was designing the concept for a building, rather than an actual building.  This will lead to an embarrassingly bad building one day, but the Broad Art Museum isn’t that design.  In any case, a highly conceptual architect like Hadid would’ve appealed to academics, who have a highly developed taste for the abstract. In her New York Times article Robin Pogrebin suggests that the cosmopolitan Zaha Hadid may seem out of place on the campus of a Big 10 university, but her selection makes a certain kind of sense.  Having attended a couple of universities that were similar in many ways to Michigan State, I wonder if the university saw itself in Hadid: someone whose ideas are bigger than her accomplishments. Yes, her selection reflects a certain insecurity, but it’s the kind of insecurity that leads to innovation.