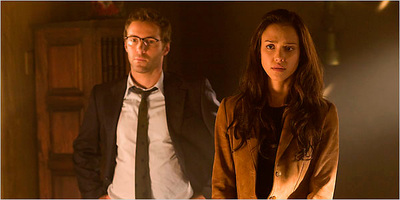 It’s January, so our screens are now inhabited by monsters and ghosts. The number one film in the country right now is Cloverfield, in which a monster demolishes Manhattan with a few swipes of his tail. The horror film One Missed Call has recently departed the theaters, but this past weekend another morbid thriller arrived in the form of David Moreau and Xavier Palud’s The Eye, a remake of the 2002 Hong Kong film by Danny and Oxide Pang.

The Eye, starring the geek princess Jessica Alba, differs from recent buckets o’ blood films like Hostel and Saw in that it’s a ghost story that relies on implication more than evisceration. Like One Missed Call, The Eye is part of the relatively new sub-genre known as the J-horror (or Japanese horror) film. These films are actually English-language remakes of a Japanese and South Korean genre that isn’t very old itself.  J-horror films, according to Terrance Rafferty, are

quiet, slow-paced, utterly solemn ghost stories in which young women (or schoolgirls) are repeatedly menaced by some malevolent supernatural entity, usually the spirit of a pale, longhaired woman who’s extremely annoyed about having expired.

J-horror films have become popular here just as the genre is dying out in Japan and South Korea. Its last gasps can be seen in two recent films by the few remaining directors who haven’t already moved on to Hollywood. In Sion Sono’s Exte young women are attacked by their own hair. The young heroine of Park Chanwook’s I’m a Cyborg but That’s O.K. is such a loser that no ghost will bother to haunt her, so she’s left to talk to vending machines.

The more indirect and suspenseful horror of the J-horror genre isn’t exclusively Asian, of course. Late last year Juan Antonio Bayona’s The Orphange was released in the US. The film was produced  by Guillermo del Toro, whose high-end horror film Pan’s Labyrinth was nominated for an Oscar.

But what distinguishes J-horror films from the Spanish-language variety and the whole non-slasher horror tradition of films like The Innocents (1961), The Haunting (1963) and The Others (2001) is the J-horror’s particular twist on the genre’s standard tension between the human and the non-human. Horror films are famous for their charged sexuality and violent repressions, but in their invocations of innocence and youth, J-horror films are dark morality tales about young women who surrender their virginity too early. The ghosts who haunt the young female victims are themselves merely the first victims of their own sexual desire. Conversing with the ghost means looking into the truth of the forbidden and seeing one’s disembodied desires stuck in the netherworld between body and spirit, or between Hello Kitty and marriage. The J-horror film doesn’t need to resort to cutting up bodies because the worst horror has already happened.