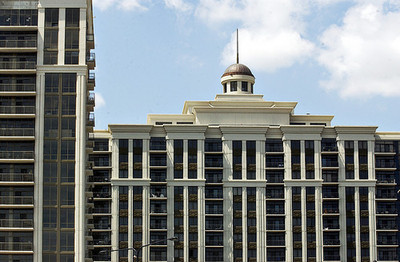 Chicago Tribune architecture critic Blair Kamin reviews what he calls a "rogue’s gallery" of awful buildings constructed in the city during its recent building boom. Chicago has built 160 high rises since 1998, more than many major cities have in their entire skyline.  This boom should have brought about a renaissance of the Chicago Style, but instead the building boom has revealed how shallow the architectural talent pool is in the city. To take one botched section of the city, the cluster of new residential towers along Columbus Drive, Kamin finds one excellent building, Jeanne Gang’s Aqua Building, currently under construction, and a cluster of embarrassing neo-classical towers called Lakeshore East. Kamin notes,

Lakeshore East speaks to the quality gap between the profession’s stars and its anonymous rank and file. It’s like a baseball team that has a couple of power-hitting .300 hitters, but everybody else bats .100. You may get a home-run building here or there, but the overall quality of the architecture is anything but all-star.

I can attest to the horribleness of the buildings in Kamin’s rogues gallery. River North, the city’s art and design district, has some of the most mediocre architecture in the downtown area. Architects like Jim Loewenberg have looked beyond the River North’s trendy design boutiques to the neighborhood’s origins as a warehouse district by designing buildings that look like packing crates.  Further east, closer to the Magnificent Mile, there are some dogs, too, as the photo gallery shows.  The Antunovich Associates’ Bernardin building, named for a modest cardinal, is supposed to resemble a Florentine palazzo, but in actuality it evokes a Filene’s Basement.

Kamin focuses on the city’s lakefront showcase spaces marred by architectural junk, but he could also have found another rogue’s gallery sprouting around Wolf Point, where the Chicago River splits into its North and South branches. This is the oldest part of the city and it’s never been served especially well by its buildings. On the plus side there’s Kohn, Pedersen Fox’s excellent 333 W. Wacker Drive building (built, incidentally, on the site of the hall where Abraham Lincoln was nominated for president in 1860), and slightly further down the South Branch is Perkins and Wills’ underrated Boeing Building. The best known building on Wolf Point is the Merchandise Mart, where I work. It’s a dignified building, but not a thing of beauty or grace. Conjoined to the Mart is the Holiday Inn, a blunt modernist structure that now houses the Sun-Times, after its cool 1955 Naess and Murphy headquarters was torn down to make room for the Trump Tower.  The Holiday Inn is almost East German in its ugliness, but at least t it has the excuse of being a chain hotel. Across the river from the Holiday Inn, right at the head of the river, is perhaps the grossest misuse of a prime location in the city: DeStefano and Partners’ Riverbend Condominiums, built in 2002. It’s not actually a horrible building. It would sparkle in a place like Duluth. But what a wasted opportunity.  It’s a building meant to be looked out from rather than looked at. I’ve photographed it through a filthy Merchandise Mart window using my BlackBerry camera without bothering to retouch the photo, because the promo photos I found made it look a lot brighter and stately than it really is. (The Holiday Inn is at the right edge of the frame.) At night, the building is outlined in blue neon lights, the kind of decorative touch Las Vegas hotels outgrew a decade ago.

Fortunately, I think, there are plans to drop three Cesar Pelli-designed residential towers onto the Holiday Inn’s parking lot (in the foreground of the photograph). The dirt is owned by the Kennedy family, and they’re working with Hines Interests L.P., the developer of a 75-story Jean Nouvel building next to MoMA, to develop the site. However, as Kamin points out, shoe-horning in small buildings on tiny lots (the Holiday Inn lot is an irregular-shaped four acres) has led to some buildings with all the design panache of a lean-to addition. And by the way, once the Pelli residential towers are completed, the river bend views, Riverbend Condominiums’ entire reason for being, will be permanently obscured.