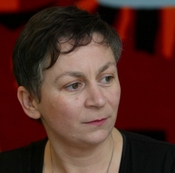 Like a lot of readers, each year when the Booker Prize nominees are announced, I vow to read the most promising of the bunch, if not all five of them. This is the first year I actually read one, and I didn’t get around to it until it had already won. I picked up Anne Enright’s The Gathering only because it was awarded the Booker; the descriptions didn’t make the book seem particularly appealing. Tragic death, dysfunctional family, an author known as a gloomy stylist and embraced only by a few stalwart readers of literary fiction–The Gathering didn’t seem like a novel I should bump up to the top of my reading list, especially during a Chicago winter that’s gloomy enough on its own. But with the lack of a compelling new release out there, I decided to give it a shot. I’m glad I did.

Here’s the story in a nutshell: a thirtysomething Irishman is fished out of the sea off Brighton, dead after a carefully arranged suicide. His sister, our narrator, is put in charge of bringing the body back to Dublin so that the entire Hegarty clan–nine surviving children and a doddering mother–can mourn in their tetchy way. Veronica, the narrator, remembers her dead brother Liam as a lovable pain in the ass. His entire life is a series of wrong turns and bad decisions. He seems biologically fated to be miserable. Teenaged fecklessness develops into adult alcoholism and eventual self-annihilation.  His one redeeming quality is his loyalty to his sister. They’re allies in the eternal war amongst the Hegartys. After his death, Veronica is entirely alone, despite her decent, if remote, husband and her lovely daughters.

It’s a testament to the prickly lyricism of Enright’s prose that Veronica comes across as a likable character. Veronica is a hard one to love. She’s terrified of male sexuality, which makes rough going for her husband. Besides Liam, the only family member she retains any affection for is her grandmother Ada, who is as negligent a parental figure as Veronica’s witless mother, but Ada has charm and a dim glamour. Veronica really only loves the dead and the near dead. She forms a mini crush on her brother’s young English mortician. She seeks out the mass grave where her uncle, an inmate at an insane asylum, is buried. Veronica’s soul is so constricted she finds some of her most profound solace in airport hotels.

Her other form of solace is drudging up the past, and most of her work as a narrator involves  scanning her memories to figure out why her brother stuffed stones in his pockets and threw himself into the sea. I won’t give away the secret origin of Liam’s stubborn loserdom.  The novel turns on Veronica’s recovered memory of a traumatic event in her brother’s life. This is a creaky plot device, although Enright hedges her bets by having Veronica admit she may have imagined the entire episode–an equivocation entirely consistent with Freud’s own remarks on recovered memory.

While Liam’s unhappiness has a defined origin, the explanation for Veronica’s unhappiness comes not from a single traumatic event, but from her own voyeurism–to use another careworn Freudian concept. As a girl Veronica watches, and imaginatively extrapolates from, scenes between Ada and her grandmother’s landlord. The disgust Veronica feels at their flirtations, but never articulates, is the resemblance of her own marriage to the middle-aged sexuality she gazes upon. Substitute the landlord’s petty business dealings for Veronica’s husband’s business ventures and Ada’s parttime work sewing costumes for the theater for Veronica’s arts degree, and you have something narrowly psychological but also something more broadly social and historical.

The dramatic tension of The Gathering arises from the clash between an older sentimental miserablism and a contemporary Irish entrepreneurialism. It’s the "Da drank his wages, so it’s rainwater for dinner again" school of Irish storytelling updated for the EU economic boom, but–and this is crucial–stripped of sentimentality. Veronica tools about the Dublin suburbs in a Saab while her husband toils obscurely in his business. In his later years Liam seemed stuck in the past, "a kind of hick" compared to his progressive siblings. The nastiest of the Hegarty boys has matured into a successful businessman and family man. The scene in which Veronica nurses her grief and anger by drinking white wine at sunrise while parked in her Saab pretty much sums up the novel’s historical conflict.

Veronica navigates between a chaotic past and a dishearteningly affluent present with her bitter but fair heart. She can crack jokes about Catholic saints and take a pot shot or two at the English.  She also has enough perspective to realize that a few shared cigarettes between brother and sister aren’t enough to base an entire life on. In her own begrudging way, Veronica finally comes to terms with her grief and stands ready to embrace her present, credit cards in hand.