The Getty Museum has acquired 252 photographs by Irving Penn. The photographs, condescendingly called "The Small Trades," represent a departure in content, if not form, for the fashion photographer. The photographs feature workers posed in Penn’s trademark blank stage, in full body length, with the subject gazing serenely back at the camera. The Getty acquired the "Small Trade" photographs because they round out the career of an important American photographer. Virginia Heckert, an associate photography curator at the Getty, is "very excited" about the acquisition, which doesn’t mean anyone else has to be.

The problem isn’t fashion photography, per se. Fashion photography is unique because it finds an eternal value, beauty, in the transitory, fashion. The glimpse of something enduring within the fleeting formed the basis of Baudelaire’s definition of modernism. Later, Walter Benjamin picked up this view for his own understanding of modernism and its relation to the culture at large.

But "The Small Trades" are not fashion photographs. They are portraiture of an elaborately staged, and class-conscious, kind. Why Penn should turn his attention to the lumpenproletariat isn’t clear, but, now that they’re in the Getty Museum, for us the question is, what do Penn’s photographs tell us about the history of photography?

One explanation is offered by Heckert, who says Penn’s photographs are "really about the subject presenting himself in a more intimate setting to his photographer. It’s a more psychological relationship between the artist and the subject." Maybe Penn got tired of looking at vacuous models and wanted someone more interesting looking back at him. What’s clear is that Penn wasn’t interested in changing the nature of his medium’s relation to its audience. These are photographs for the same cultivated middle classes that were consumers of his fashion photography.

In his writings on the history of photography, Walter Benjamin distinguished between those photographers who mystified the process of creativity, and those who opened up it. (He made the same distinction, by the way, amongst architects and filmmakers.) Penn may have placed the working classes at the center of his photography, but he doesn’t allow his subjects to appropriate (Benjamin used the word "absorb") his mode of seeing. 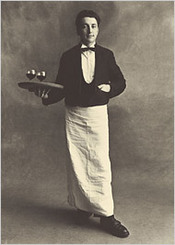 Take a look at Penn’s photograph of a waiter, "Garcon de Cafe — Raoul," shot in Paris in 1950. Raoul is a vivid individual–no anonymous, plasticized model here. But there’s nothing particularly illuminating here for another waiter. The subject has been completely decontextualized, utterly shut off from lived experience. Furthermore, you can practically see the process of commodification gathering around him. He is the model of the "Parisian waiter" at the exact time when the French tourism and leisure industries were assuming their present form to accommodate the masses of American tourists flocking to Europe after World War II.

Whether he’s photographing a fashion model or a charwoman, Penn reduces his subject to a drama staged for the benefit of a controlling male gaze. It elicits the clichéd response, "You look fabulous," which is at once complementary and dismissive. Of course, one could argue that that’s pretty much the essence of fashion, but at the same time, fashion is supposed to be something one inhabits. It allows one to control, to a certain extent, what semiotic messages one wants to send. Penn’s crucial innovation, arguably, isn’t the famous gray background, but the full body shot. The subject of the photograph is a whole thing with no outside–no inside, either. Nothing individual sticks out. Even Raoul’s jaunty tray is off balance, a mere prop that doesn’t express anything individual. In Penn’s photographs, there is no place to hide, and no place to inhabit, either.