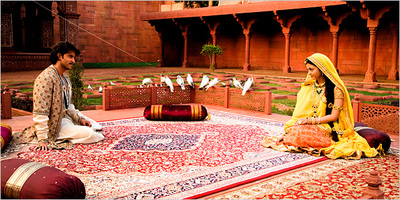 It’s long been assumed that Hollywood and Bollywood will someday merge. The huge popularity of certain Bollywood stars, which attract followings in size and intensity to rival a religious sect, make their migration to LA seem inevitable. Aishwarya Bachchan and Hrithik Roshan, the stars of the Bollywood blockbuster Jodhaa Akbar, are the latest Indian celebrities being wooed by Hollywood.

According to Anupama Chopra, no Bollywood actor has starred in a major Hollywood film for logistical and ego reasons, telling us, "Schedules and expectations are difficult to match. Bollywood superstars are generally unwilling to play supporting roles in American movies, and there just aren’t many movies coming out of Los Angeles that feature Indians as leads." But are those the only reasons why the world’s two largest film industries remain almost completely separate?

Some non-Indian studios have made inroads into the Indian film market, Sony and Disney being the most prominent. The more worldly tastes of the Indian diaspora audiences have nudged Bollywood films closer to Hollywood models. But generally speaking, Bollywood and Hollywood remain parallel but distinct worlds. It’s hard to imagine mainstream American film audiences lining up to watch a three-hour masala film with classical Indian dance numbers and an arranged marriage plot. American audiences’ tastes in excess tend to run toward the technological rather than the melodramatic.

But there are other, less obvious reasons why the American and Indian film industries have never worked together. (By the way, I know Bollywood and the Indian film industry aren’t the same thing; it’s just easier in a short piece to referred to them as if they were.) The Mumbai-based film industry is notoriously clannish. If Hollywood has the social structure of a high school, Bollywood is a small family business. Outsiders, even from India, have a tough time breaking into the business. Furthermore, Hollywood executives may want to stuff bulletproof vests under their power suits if they really want to do business in Mumbai. Because of funding restrictions on Indian films, one significant source of funding is organized crime. A few years ago Roshan’s father took a few bullets from some mobsters unhappy about his refusal to accept their creative input. Bollywood is plagued by petty crime as well. Piracy of Indian films around the world is rampant. Even paying customers aren’t exactly gold mines. Worldwide Bollywood sells a billion more tickets a year than Hollywood, but total grosses are a tenth of the American film industry.

Finally, despite its global profile, Bollywood remains rooted in the particulars of Indian culture. What Salman Rushdie once called the "Epico-Mythico-Tragico-Comico-Super-Sexy-High-Masala-Art" is designed to dazzle both the illiterate lumpenprolitariat and information-age workers. Bollywood films exert a powerful mythological tug for audiences caught between traditional values rooted in village life and the materialism of the gleaming data centers. This is why marriage plots are so important. The blockbuster Jodhaa Akbar is about a 16th-century arranged marriage. As Henry Fielding knew in the 18th century, the tension between an arranged marriage and a romance is central to a middle class person’s struggle for self-definition in the early stages of capitalism. Hollywood, of course, is equally obsessed with the marriage plot, but at the other end of the same historical process. Hollywood is more concerned with the threat to romance posed by late capitalism.

In any case, perhaps if Brad Pitt lived with his parents, like Hrithik Roshan does, then maybe American audiences, and Hollywood producers, will be ready for the Super-Sexy-High-Masala-Art. In the meantime, Hollywood will continue to try to find a role or two for a dewy-eyed beauty like Aishwarya Bachchan before returning her home to Mumbai, where she lives with her husband’s parents.