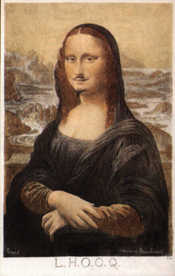 In his magisterial new book Modernism: The Lure of Heresy

the intellectual historian Peter Gay makes some puzzling claims. Most comprehensive accounts of modernism divide it into at least two strains, one that saw something to retain in Western culture, and another that wanted to trash the whole thing and start all over again. But Gay claims that "liberalism" was the ‘"fundamental principle of Modernism."  Surely by "liberalism" Gay can’t mean the way the word is currently used and abused in the United States. Gay is a historian, so perhaps he’s referring to the eighteenth-century uses of the word to mean "open-minded" and "unorthodox." This early sense would accommodate André Breton’s remark that "the simplest surrealist act consists of dashing into the street, pistol in hand, and firing blindly, as fast as you can, into the crowd."

There was a whole brand of modernism that was all about exploring the limits of unorthodoxy. If you want an overly vivid demonstration of this tendency, just watch, if your castration anxiety will allow you, the first scene of Luis Buñuel and Salvador Dalí’s Un Chien andalou in which a man slits a woman’s eyeball with a razor. But the modernist movement also includes the decorous T.S. Eliot, the fey artificer Andy Warhol, the dreamy mythologizer William Butler Yeats, and the solemn demythologizer Walter Benjamin. None of these people would be comfortable being labeled a "liberal" as the term is currently used. Benjamin certainly would have sneered at it as inadequate to what he was trying to do.

The second questionable claim Gay makes is his assertion that World War I inspired "few striking innovations in high culture." True, the most innovative artworks of the first two decades of the twentieth century were created before hostilities broke out: Duchamp’s Nude Descending a Staircase (1912), Stravinsky’s Rite of Spring (1913) and Picasso’s Demoiselles d’Avignon (1907), but the most insouciant artwork of the century was created at the war’s sour peak: Duchamp’s Fountain (1917). Irish literature before the Great War was Yeats and John Millington Synge; afterwards it was James Joyce and Samuel Beckett. Ezra Pound spent the pre-war years tinkering with Symbolism and the fustier reaches of romanticism. After the war Eliot overturned everything in English poetry with The Waste Land. By comparison, the Second World War was aesthetically barren. Abstract Expressionism, the most original post-war movement, owed a considerable debt to interwar painting, while John Cage was Dada with a piano.

Then there’s the great modernism/post-modernism divide. Gay argues that modernism eventually ran out of gas, then sold out.  Duchamp’s Fountain and L.H.O.O.Q. (pictured above) are now art museum gift shop items. The theater of the absurd has been picked apart in heavily-footnoted Ph.D. dissertations.  Andy Warhol and Roy Lichtenstein threw up their hands at any political commitment and reveled in the cheesier aspects of popular culture.  The last warhorses of antagonistic modernism are Günter Grass and Gabriel García Márquez. Among younger authors cutting edge lit is now about losing your memory.

But in his epilogue–maybe Gay wants us to see post-modernism as an epilogue to modernism–Gay pays a visit to Frank Gehry’s Bilbao Guggenheim and sees in the brash curlicues signs of modernism’s old anarchic energy. But in general, modernism "has had a good long run," Gay sighs, but now it’s pretty much over with. Whether he’s right or not is the subject of another book.