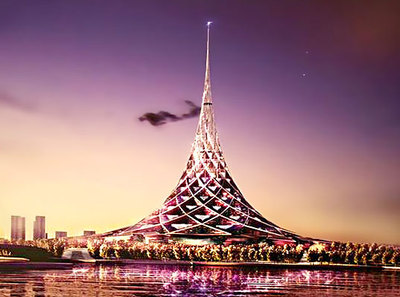 As a follow-up to my earlier post on socially-conscious architectural practices, here’s a look at what’s happening on the upper end of the architectural stratum. Last week in Dublin Daniel Libeskind went all "Spielberg," as Times‘ Tom Dyckhoff puts it, and declared "I won’t work for totalitarian regimes. Architects should take a more ethical stance."

"That would be a first," Dyckhoff acidly comments. "Before Libeskind came along with his pinko views, Western architects had been making a perfectly decent killing building monuments for regimes that you definitely wouldn’t want to bring home to meet the folks." Dyckhoff goes on to list some projects in which high-profile architects are working with some shady characters. Dyckhoff picks on Norman Foster in particular for his affinity with Russian oligarchs. He mentions Foster’s Crystal Island project in Moscow, pictured above. Foster is also working on another project in Moscow. It’s more modest than Crystal Island–merely redecorating Red Square–but it also evinces a totalitarian flair with its Haussmannization of the historic center of the Russian capital.

Dyckhoff goes on to skewer Rem Koolhaas’s CCTV Headquarters in Beijing, ("just how many other one-party command economies have been magicked into multi-party democracies by one building?") and Zaha Hadid, the darling of London, for designing a monument to Heydar Aliyev, the brutal former strongman of Azerbaijan who learned his trade from the Soviets ("Maybe she misheard. It was KGB, Zaha, not D&G."). Dyckhoff doesn’t mention Dubai, but one could shake one’s head at the sight of A-list architects like Hadid, Frank Gehry, Jean Nouvel and Tadao Ando lining up to work for petrodollars.

Architects are generally on the side of power. But aren’t we all?  My paycheck has some petrodollars in it somewhere. Most of us make comfortable livings for undemocratic, profit-driven enterprises. Furthermore, the entire tourist trade in Europe would dwindle to nothing without the continent’s monuments to naked power. Walk through the Piazza Venezia in Rome and you’ll see the balcony from which Mussolini did his chest thumping. Turn around and you’ll see the huge and vulgar monument to Vittorio Emanuele II, built by Il Duce himself.

Or take a stroll down the elegant boulevards of Paris, built by Baron Haussmann in the 1850s and 1860s. To construct the boulevards Haussmann tore up the old medieval heart of Paris, tossed the working classes to the city’s fringes, and installed the bourgeoisie in its place–all at a handsome profit to himself and his cronies. As Walter Benjamin noted, the Parisian boulevards extended the phantasmagoric effect of commodities on display from the Paris Arcades and the world exhibitions to the streets of the city as a whole, further mystifying class relations in the city. The boulevards opened up the city to monumental vistas and facilitated the movement of security forces throughout the city. The boulevards were also designed to ensure the unruly masses couldn’t throw up barricades during their periodic uprisings.

Castles? Monuments to feudal repression. Skyscrapers? Phallic assertions of trans-national corporate power. I could go on and on. Yes, it would be nice if architects would listen to their consciences more often, but I don’t know who has the energy to clear every business transaction with Amnesty International. Is designing a media headquarters for the Chinese morally better or worse than buying a Thomas the Tank engine toy from the Chinese?  Who decides these types of questions? Until those questions are sorted out, rest easy: the starchitect-designed authoritarian monuments will some day make excellent Flickr slideshows.