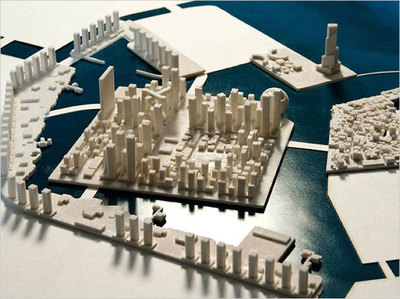 Nicolai Ouroussoff reports on one of the most unlikely architectural commissions in recent memory. Rem Koolhaas has been hired to design a generic city in Dubai, a dreamless city within a dream city. Thus far Dubai has commissioned showy displays of starchitect whimsy, so, at first glance, it’s surprising to see the city embrace the deliberately bland rationalism of Koolhaas’s generic city. On second thought, though, it seems perfect for Dubai.

If the paradigmatic object of the nineteenth-century city was the railroad station, the twenty-first century generic city, Koolhaas argues in S, M, L, XL, is modeled after the airport. Koolhaas asks, “Is the contemporary city like an airport–‘all the same’?” Like airports, which are all modern in exactly the same way, the generic city has no identity–no past, no future, no identity, no distinction. The identities of most cities may be located in their centers, but paradoxically, instead of being a fixed essence, the center of the city is the often subject of fretful debate about preserving and developing a city’s identity. Meanwhile, outer neighborhoods muddle along, existing as nothing but themselves, but also nothing particularly essential. The generic city, by contrast, is nothingness writ large. The generic city has the desultory blandness of outer boroughs. The generic city, Koolhaas declares, is “a city without qualities,” a condition that even vividly individualistic cities tend towards. Paris, for instance, has turned itself into a self-parody in an effort to remain Parisian, while London changes constantly, only to become more and more like any other city.  Eventually, Paris will turn into Las Vegas, and London will become Atlanta.

Atlanta itself will be packed up into skyscrapers, those stand alone objects that kill off street life–the very essence of urban life. “Urbanism doesn’t exist,” Koolhaas declares. “It is only an ideology in Marx’s sense of the word.” The paradigmatic urbanite will no longer be a latte-sipping hipster but the weary sales rep who never completely unpacks his suitcase. The generic city will be “unshapable.” It will resist urban planning, beautification projects, and empowerment zones. No one will make a PBS special about its history. It will resist all nostalgia. It will be ruthlessly practical and eternally up-to-date. Generic cities “will work–that is all.”

This sort of pragmatic absolutism extends to the generic city’s government as well. Koolhaas notes with forlorn vagueness that generic cities are apolitical, even a bit authoritarian. The rule of law and the rationality of the democratic process are replaced by pure exchange. Everyone and everything will be a commodity and suffer under the vagaries of the marketplace. In short, the generic city is the physical embodiment of the principle of exchange value in the global economy.

Which makes it perfect for Dubai. Its wealth comes from oil, a commodity that is at once from the earth and placeless. Its authorities are anonymous, benevolent princelings trying to build a modern, world-class Arab city. It’s telling, however, that this forward-looking city is separated off from any cultural or social reality of an actual Arab state by feudal moat. The city Koolhaas has designed for them resembles less a miniature Manhattan–the Coney Island of Koolhaas’s Delirious New York–than an old Pentium Pro chip. There’s only one vestige of old humanism, and that’s the macabre eye on a corner of the island. The dour functionalism of the generic city has a collateral effect of tearing the old human subject apart, atomizing it into sensory apparatuses entirely dependent on the circuitry of the generic city to function. Among the historical detritus swept away by Koolhaas’s generic city is urban experience itself. The Dubai minicity couldn’t be further away from Baudelaire’s ragpicker Paris.

Ouroussoff sees Koolhaas’s Dubai project as a provocative, if flawed experiment in a new kid of urban space. This may be so only if the debate about urban space has reached a dead end. Generic cities already exist. Every Midwestern and Sunbelt city has at least one satellite city that’s a sprawling nowhere. Schaumburg, Illinois is one local example. The city is so disconnected from nature and history that asphalt is practically an indigenous life form.  Koolhaas is one of our foremost thinkers, so any proposition he has about the future of the city should be taken seriously, but surely there must be something between New Urbanism and no urbanism at all.

For more on the Waterfront City project and the generic city, see my essay in Static, which is an expanded version of this entry.