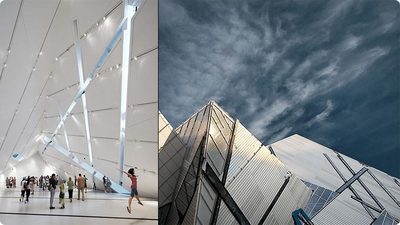 The latest issue of Condé Nast Traveler reminded Toronto of its buyer’s remorse for the Michael Lee-Chin Crystal at the Royal Ontario Museum, designed by the perpetually off-kilter Daniel Libeskind. According to legend, Libeskind designed the museum on the back of a napkin during a wedding, and the building looks a bit like a starched napkin that’s been set aside while the diner goes to the bathroom. There are even little bits of what looks like food on the building. The editors of Condé Nast Traveler chose the ROM addition one of the "New Seven Wonders of the World," along with other photo spread-ready buildings such as the monstrous Burj Dubai, the very cool New Museum in New York, and a whatchamacallit building in Denmark. The Seven Wonders buildings are all sharp-edged, high-contrast structures that stand out from their drab surroundings–a way of seeing derived from professional shallow-focus photography. Of that’s how you see the world, then book your ticket for Toronto.

And when you get there, don’t ask any of the locals about the ROM wing. Last year The Globe and Mail‘s architecture critic Lisa Rochon groused that the Crystal, as the ROM addition is known, represented the "exaltation of one architect, one man, one individual," i.e., Daniel Libeskind, who Rochon curses as "a marketer with a silver tongue"and, interestingly, as an "exile." For Rochon the Crystal isn’t even one of the seven wonders of Toronto; she proclaims it’s "the building most likely to come down in the next 20 years."

Is it really a throwaway building? Only a visit can tell for sure. The architect’s renderings show lots of spikes in the sparkling Toronto sky–Toronto is perhaps the cleanest major city I’ve ever visited–and interiors that make one lean ever so slightly to one side. Perhaps that’s why the image above shows a girl leaping into the air, no doubt exclaiming "Daniel!" The design itself doesn’t seem to encourage much spontaneous movement. This may be precisely the point, though. Rem Koolhaas and Zaha Hadid, to take only two examples, have expressed an interest in architecture that effects the body in mildly coercive ways: ceilings drop down when one expects them to be high, corridors jut off into all directions, walls curve around an idea as much as a physical object. Frank Lloyd Wright was a coercive architect in that he created spaces intended to shape behavior rather than simply provide a backdrop to it. So did Christopher Wren.

Despite local opposition to Libeskind’s kinetic geometry, Condé Nast Traveler reports that some people believe "the aggressively decontructionist addition is just the shock of the new that this slow-to-change city needs." For his part, ROM president William Thorsell points out that the design selection process was very public and nobody raised any objections to the design then. "Over time, I think it will prevail," he says, and he’s probably right.