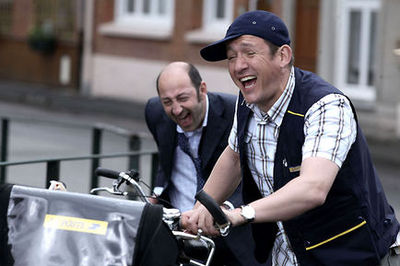 André Bazin is rolling over in his grave.

The most popular French film of all time is now Bienvenue chez les Ch’tis, a feel-good comedy about a postal worker who is cured of his malaise by a visit to a small town in Brittany, a region of chilly rains and strange cheese. State television, fulfilling its mission to issue grand, oversimplified statements about the nation, calls the film "the national anti-depressant."  Le Monde, in an even more telling comment, called the film reality "without its venom." One out of every four people in France have seen the film, which means you can randomly pick any four Frenchmen–say Nicolas Sarkozy, Jean-Luc Godard, Michel Houellebecq, and Zahane Zadine–and one of them has seen it.

First of all, what on earth do the French have to be depressed about? They elected a jerk for president, but that can happen to the best of countries. The French are in debt up to their ears, but relative terms no more than Americans are, and the French economy is growing faster than the German one. Sure, unemployment is around 7% (21% for people under 25), but at least their houses aren’t bleeding value. Besides, as the easygoing Britons in the film demonstrate, a long lunch is a fundamental right whether one is employed or not.

We’ve come to expect films maudits from the French, not hick parables.  French film should be as acerbic as a drag on a Gitanes Brunes.But Bienvenue chez les Ch’tis reminds us that the French have their crowd-pleasing cinéma de sam’di soir. Their film industry may have more in common with Hollywood than the Criterion Collection might suggest.  One of the most celebrated and quintessentially French films of recent memory is Jacques Audiard’s The Beat That My Heart Skipped, which was a remake of James Toback’s psychodrama Fingers.

Ch’tis and the earlier discussion in this space about Kenji Mizoguchi has taught me that what I think of as a national cinema is really a commercial construct. The French films screened in this country are export products–more specifically, they’re luxury goods like Burgundy wines and Louis Vuitton. To a certain extent the entire country is a luxury good for foreign consumption.

This isn’t to take anything away from the French cinema. André Bazin, the great French film critic, virtually single-handedly raised film to an art form by showing Americans what was great about our own mass market films. Nor does  Bienvenue chez les Ch’tis represent the "real" French cinema–merely one part of it. When I watch a French film like Amalie or The Dinner Game I always imagine that I’m somehow looking over the shoulder of the French watching themselves. I realize now that it’s important to keep in mind that, sometimes, chic foreign films can represent a sort of national presentation of self: the cinema a country wishes it wanted, rather than the one it really wants. Certainly the same thing happens in the US.