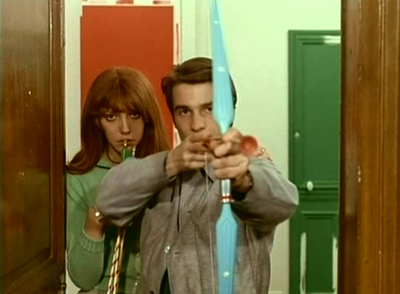 From now through June 5 the Film Forum in New York will be screening Jean-Luc Godard’s films from the 1960s.  The series coincides with the fortieth anniversary of the famous 1968 Cannes Film Festival, in which Godard, François Truffaut, Louis Malle and other directors interrupted screenings in order to show their sympathy with rioting students and workers. In view of the revival of interest in Godard’s films, it’s worth considering, yet again, the parallels between that time and our own: an unpopular president persecuting an unpopular war, a deepening generational divide, a wobbly economy, and a widespread call for change.

So where is the Jean-Luc Godard of today? The most plausible candidate I can think of, besides the still very much alive and productive Godard himself, is Michael Moore. For all his faults, which are legion, no other filmmaker today has anything resembling Godard’s a sense of political commitment, distinctive film style, and popular following. Errol Morris is an éminence grise and a much more polished filmmaker than Moore, but his films don’t insert themselves, or insinuate themselves, into public sphere discourse the way Moore’s films do now, and Godard’s films did in the 1960s.

If Moore seems like a faint echo of Godard, it should be noted that Godard had some significant advantages over Moore and other political filmmakers working today. First of all, there was the highly photogenic Paris protests of May 1968, when society was briefly out ahead of Godard. He had to do some of his most inventive work just to catch up. American filmmakers of the 2000s have no such singular event around which they could galvanize cinematic practice. In place of young people shooting slogans on the boulevards, political opposition is now voiced in a million editorials and gradual shifts in opinion polls. In fact, there is no shortage of films addressing the enormous problems confronting our society, including an array of Iraq War films that nobody watched. However, the only two political films that have done any kind of respectable box office are An Inconvenient Truth, made by an ex-vice president, and Sicko, about the health care crisis, perhaps the most insolvable of the issues dominating the 2008 election. They are well-meaning and effective films, but hardy dynamite at 24 frames per second.

Another advantage Godard and his cohort had was (relative) novelty and not much competition from the mainstream cinema. When films like The Sound of Music and Around the World in 80 Days were among the most honored Hollywood films of the decade, you could make a radical film just by having Jean-Paul Belmondo mugging for the camera. A.O. Scott asserts that "a strong case can be made that [Godard] was the era’s single most influential artist in any medium." This could well be true, but for all of the romantic radicalism of 1960s cinema, it’s possible to overstate its actual cultural impact. Popular music was much of a cultural catalyst than the cinema, if for no other reason than the films of La Nouvelle vague, Das Neue Kino, and other ground-breaking national cinemas were largely inaccessible to most Americans in the pre-VCR era. This isn’t to say that widespread exposure necessarily means profound influence. The Velvet Underground, long considered one of the most influence rock bands ever, wasn’t exact hit parade material. Rather, the synergies around music of the time penetrated far deeper into the culture than film ever did. Bob Dylan spawned thousands of imitators, but name one filmmaker working today who acknowledges Godard as a primary influence.

By rights Godard should be making American Express ads by now, but he’s still making challenging, important films. His moment has passed–it was really quite short, just ten years–but that isn’t his fault.  What’s changed today isn’t filmmakers so much as film audiences: they are so much more diffuse than in the 1960s, too well-versed in auteurist principles to be so easily impressed, as audiences were in 1976 watching Alain Tanner’s Jonah Who Will Be 25 in the Year 2000. We are the children of Jean-Luc Godard, but with one important difference: instead of looking for a cinema that breaks down the barriers between art and life, we’re looking for a cinema trying to avoid becoming just another profit center in an entertainment conglomerate.