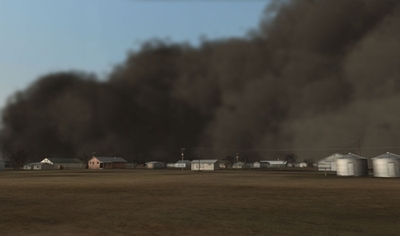 There’s an old story, retold by Jacques Lacan, about a trompe-l’oeil contest between Zeuxis and Parrhasios. Zeuxis paints some grapes that are so realistic birds flock to them, mistaking them for the real things. Then Perrhasios takes his turn and paints a veil so realistically that Zeuxis wonders aloud what’s behind the veil. Zeuxis quickly realizes his mistake, blushes in embarrassment, and concedes the contest to Perrhasios. The story illustrates how animals can be lured by a false surface, but humans are lured by what lies beneath the surface.

This story is helpful in understanding Artropolis, an annual art show held in the Merchandise Mart in Chicago. The Mart is a vast building consisting mainly of high-end interior design showrooms, along with a smattering of other businesses, including the software company for which I work. I don’t know if it’s because of the crowds in the Mart or the juxtaposition of artworks and displays of sleek Italian kitchens and faux-Second Empire living rooms, but Artropolis doesn’t invite the sort of contemplation of formal elements one is used to in a museum. Rather, we’re compelled to consider the art within a specific context, in this case images and objects of high bourgeois domestic idealism.

I didn’t have the time to take in Artropolis on a systematic basis. I didn’t even pay to see the exhibits (I snuck in to a few). But in my limited sample two artworks stood out as emblematic of the whole experience of Artropolis and whatever the exhibit itself is supposed to represent. The first was a life-sized unicorn set up in the lobby of the Mart. I couldn’t get close enough to the sculpture to see the title or the artist. (In fact, it didn’t strike me as a blog post subject until it was already removed.) It’s pretty easy to imagine: an anatomically correct horse, whitish, with a horn sticking out of his forehead.  The sculpture made a direct reference to the image store of a fantasy world sometimes plundered for furniture advertisements. The horn also relieved the sculpture from being one of those hyperreal pop art objects, like Jasper Johns’ Ballantine Ale cans, that retain the power to irritate precisely because they seem so artless.

Another take on the same theme–making the fantastic actual while de-actualizing the real–is  John Gerrard’s Dust Storm (Manter, Kansas), reproduced above. Gerrard created the image using the virtual-reality techniques of video games, but the image itself is staged like a blend between painting and the cinema. The painting refers variously to The Wizard of Oz, Dustbowl photography, post-apocalyptic video game narratives, ecological disaster, widescreen mise-en-scene, and, most significantly, high-definition television. It’s a highly detailed representational work (much of the artwork in Artropolis was representational), but any sense of trauma–an essential element of the real, as the Surrealists and Lacan have taught us–has been rigorously erased. Dust Storm has none of the visceral quality of Andy Warhol’s early 1960s silkscreen images of blood car wrecks. It is reality filtered through a technologically-mediated way of seeing.

Dust Storm is an apocalyptic fantasy domesticated, while the unicorn is an oblique fantasy of eternal fecundity. Despite the care that went into creating a reality effect, neither of them, I think, refer to some reality out there some place. Instead, they refer ultimately back to the images from which we create domestic space. Gerrard’s painting in particular is readymade for consumption: it’s a stylish replacement for the flatscreen TV, accessible to anyone with a Best Buy credit card. It also resembles the current fad of photographs blown up to unreal dimensions, then hung in a family room. The unicorn sculpture is too big for display in a private home, but it also invokes and disavows a déclassé desire: no connoisseur of fine design would admit to harboring the treacly, pre-modern fantasy of tame white horses prancing around eternally green landscapes.

Similarly, the interior design industry is all about the lure of what lies beyond quotidian residential spaces. Designers don’t try to exactly reproduce a medieval French chateau in a suburban McMansion. The illusion is more or less explicit. It consists of real, and very expensive, objects positioned between the owners’ historical fantasies and the traumatic realities of economic competition outside the home. Interior design, and the artworks in Artropolis, highly alluring veils obscuring both the real and the fantastic.