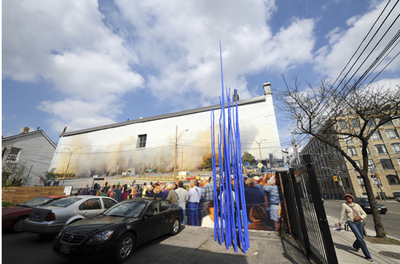 The Globe and Mail’s Kate Taylor visits Contact, the largest photography exhibit in the world, now taking place at Toronto’s Museum of Contemporary Canadian Art. Taylor says that this year’s show, entitled Between Memory and History: From the Epic to the Everyday raises the question, "where exactly photography is leading us, cellphones and Coolpix in hand."

First of all, digital photography is leading to the wrecking ball for old film stock factories. Prominently displayed at the exhibit is a photograph taken by Robert Burley (above) of the destruction of buildings 65 and 69 at Kodak Park in Rochester, NY. The irony is double: the photograph includes former workers in the factories recording the event using their digital cameras, and Burley is himself mourning the death of film stock technology with a digital image.

But beyond the death of amateur film photography (the Polaroid Corporation recently announced it will quit the instant-film business next year), not a whole lot seems to be happening in photography, at least as the genre is assessed in Contact. If there’s a broad trend, it’s that digital technologies have allowed photography to assume the monumentality of painting. For instance, the Dutch photographer Bert Teunissen has a series of portraits blown up to the scale of an Ingres or David canvas. Marx once observed that new technologies initially take the form of the technology they replaced, but in Contact digital photography seems content to re-enact analogue photography’s fascination with painting.

The Contact exhibit still stages photographs as singular objects for sustained contemplation. It seems to me that if digital technology has changed photography, it has opened a whole new realm of visual experience to photography. Cheap digital images are both permanent and disposable. Whereas we once had to factor in cost before we decided to record something with a snapshot, now we’ll take pictures of pretty much anything and treat it like we were documenting the Spanish Civil War. My three-year-old son has his own digital camera, and he has already formed his own distinct style and subject matter. One series he recently completed, The Kitchen Floor, had a sequel, The Kitchen Wall. Another series, Little Sister Making a Mess of Her Lunch, was shot in one January afternoon. The Kitchen Floor sessions produced a single shot–his masterpiece, I think–of his foot. All these photos (well, most of them) are on currently exhibit on our iMac.

I’m not quite as prolific as my son, but digital photography has also changed the way I view the documentary qualities of photography, if not its expressive properties. A few weekends ago I was replacing our bathroom vanity when I ran into a particularly knotty plumbing problem. Instead of describing the problem to the hardware store salesman, I simply took a photograph of it on my BlackBerry and showed it to him. He understood right away and suggested a solution, which worked. Globally there must be several terabytes of storage devoted to shots just like this one, which I call IMG00038–quotidian photographs that either have one meaning, or none at all.

Taylor considers three photographs by the German artist Thomas Ruff as an exploration of "the false relationship that the ubiquitous image can create between the viewer and actual experience." This is hardly new ground, even for old film-based photography. It’s based on a relationship of photographer to viewer that digital photography has broken down. Photography is now much more embedded in our own experience and the ways we record it and make sense of it. Photos of kids’ parties and weekends in Telluride are now routinely circulated via email and photo sharing sites, a kind of exchangeable experience that Walter Benjamin never could have imagined, nor, evidently, any art photographs working today.