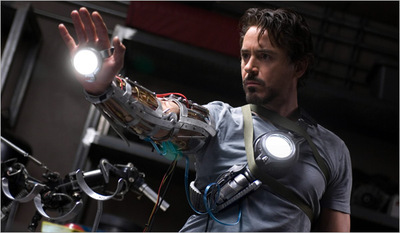 As of last night Hilary Clinton’s candidacy has run out of momentum, money, and plausibility. Just two weeks ago she’d swept the deer hunting counties in Pennsylvania and she seemed like she was going to elbow her way into the White House after all. Then, suddenly, Iron Man was released to rave reviews and blockbuster box office, and the zeitgeist either tilted away from her, or righted itself, depending on how you look at it.

Iron Man is witty and fun, which Clinton is not. It’s also hypermasculine in the Hollywood summer blockbuster way, with a few twists. The film is one part comic book extravaganza, one part ED ad, and one part testimonial to the redemptive power of good public relations. The film stars Robert Downey, Jr., who has been welcomed back not only to the executive office suites of the major studios, but also to the good graces of insurance underwriters. He plays a character that dates back to the Quiet American period of the Vietnam War, when it was still possible for men of conscience to believe they were doing something worthwhile for their country while drinking excellent martinis in exotic settings. For the film the character has been updated to the Afghan War during its own Quiet American phase, when a man could sip scotch on the battlefield, secure in the knowledge that the Taliban were scurrying back to their caves.

Tony Stark is a defense contractor, but a good one. (This is fiction, remember.) His rusty, damaged heart has been  fortified with a metal cylinder and his aging body revived by the loyal presence of Gwyneth Paltrow. Villains and other nuisances are thrown at him, but he keeps his good cheer. Unlike some other armor in another, much less cheerful war, the Iron Man’s guts of steel serve him well. He’s a figure of early middle-aged American masculinity ready for action but freed of the phony machismo and vainglorious dreams of the Bush/Cheney/Rumsfeld crowd. The film also firmly rejects the callow abstinence of George Bush, who had his own rough patch with alcohol. Iron Man is about the triumph of geniality and a bon vivant approach to solving world problems. This doesn’t describe any of the current presidential candidates, not even Ralph Nader. But if the film’s box office receipts are any indication, the American electorate is looking for something more diverting this summer than a gas tax holiday.