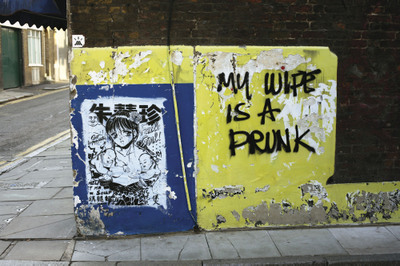 This month the Tate Modern will host an exhibit of Street Art on its Thames river façade. Among the artists exhibiting are the Italian artist Blu, the artist collective Faile from New York (the image above is from their site), the French artist JR, a pair of Brazilian artists Nunca and Os Gemeos, and Sixeart, a Spaniard from Barcelona.

To call them artists is controversial, and indeed common street gang graffiti forms one of the genre’s boundaries. The other boundary is the international art market, which is embracing Street Art with lots of cash. Street Art exists between these two poles, generating its repeatable forms and appreciating values from a play of institutionalization and rebellion, innocence and guilt.

Street Art as an object for curatorial attention and connoisseurs’ interest is a largely British phenomenon, but the practice originated in New York City. British artists took inspiration from the city’s graffiti-coated subway cars–scrubbed clean during the Giuliani administration as part of an effort to reduce crime in the city. Although some Street Art has the semi-permanence of an official public artwork, much of it continues to be hastily drawn, one step ahead of anti-graffiti teams. Stencils are popular with Street Artists, allowing reproducibility that eludes the law. As one of the genre’s founders, Keith Haring, demonstrated, a reproducible form is also an excellent marketing strategy.

Hence the skepticism the genre has attracted. That Angelina Jolie, Brad Pitt, and Christina Aguilera are among the genre’s most avid collectors has done as much harm as good. Despite the five and six figures Street Art works can fetch, the genre’s ethos is firmly in the tradition of outsider art. According to Street Art’s Picasso, a Brit who works under the name Banksy, he started off innocently enough, explaining to woostercollective.com: "I’ve wandered around a lot of art galleries thinking: ‘I could have done that,’ so it seemed only right that I should try. These galleries are just trophy cabinets for a handful of millionaires. The public never has any real say in what art they see."

Banksy’s explanation may sound disingenuous, especially considering Angelina Jolie and Brad Pitt have shelled out £1m for his artworks, but Banksy has art history on his side. The artistic avant-garde has served to challenge the institutionalization of art. Exactly how this challenge takes shape has changed over the past 100 years or so of avant-garde artistic practice, but one constant is the ways in which certain kinds of artistic practice force a re-examination of how we define art, how we assign value to it, how we preserve it for future generations, and how we lend it cultural prestige in the present.

Street Art isn’t avant-garde in form, but it functions like one. On the one hand, we have to look more closely at the scrawls that appear all over our cities. Some of it is gang-related graffiti, merely territorial markings for criminal organizations. Some of it is intriguing and witty. Some of it appears on your garage door and pisses you off. The point is that it’s all different, a form that’s as old as cities themselves. On the other hand, do we want only a bunch of fey art-school grads in our modern art museums? A bit of anarchic energy is probably what the money-obsessed art world needs right now.