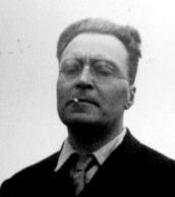 For a brief period in the 1920s, Soviet culture was among the most dynamic and creative in all Europe. During a visit to Moscow in 1927, Walter Benjamin remarked on the "improvisatory" nature of post-revolutionary Russia. But even during Benjamin’s visit the lights were starting to dim. By the time Stalin consolidated power in the early 1930s, Soviet culture was well into its extended Socialist Realist phase, with its beaming factory workers, overflowing wheat harvests, and tractors that look like they’re about to burst into song.

But what if Soviet culture had retained its creativity throughout the 1930s? Victor Serge (real name: Victor Lvovich Kibalchich) certainly would have been one of its literary stars, and he would have been much better known today.

That we have any Serge novels, let alone the seven he managed to publish, is something of a miracle. He lived a tough life. Born to penniless anti-czarists in Brussels, Belgium, Serge watched his younger brother starve to death. His first career choice was being an anarchist. That career ended with a four-year term in a French prison. His second career as a Soviet agent based in Berlin concluded with an ill-considered decision to join the Trotskyites’ battle against Stalin. In 1928 he fled the USSR for Paris, where he began his third career, as a writer.

Serge’s tense years in Paris dodging Stalin’s murderous agents formed the bases became the basis for Unforgiving Years, his last novel, written in 1947 and first published in France in 1971. The novel, like all his novels, was written in French, and it’s available for the first time in English in a translation by Richard Greeman. The action opens in the weirdly calm days before the outbreak of World War II, when Parisians were preoccupied with lurid crimes and adulterous affairs. Serge’s hero is known by various names, but the narrator calls him D. We meet him immediately after he has decided to quit the Soviet secret service because he’s lost faith in the communist revolution. Unfortunately for D, it was no easier to quit Soviet intelligence than it was to quit the Mafia. He knows he’s doomed, but he sticks around for a few days trying to persuade two women, Nadine and Daria, to escape the French capital with him.  Nadine reluctantly agrees to leave with him, but Daria flatly refuses, partly because D is prone to anguished and confused ruminations on his own principles–not a good quality when the history’s bloodiest conflict is starting to ignite. Serge depicts D’s thought process with a prose style that combines the energy and conviction of agitprop with the refined inventiveness of high modernism. The default viewpoint is third person, but the point of view can switch at any time, such as when D asks himself,

What is "conscience"? A residue of beliefs inculcated in us from the time of primitive taboos until today’s mass press? Psychologists have come up with an appropriate term for these imprints deep within us: the superego, they say. I have nothing left to invoke but conscience, and I don’t even know what it is […] I’m behaving almost like a believer. I cannot do otherwise: Luther’s words. Except that the German visionary who flung his inkwell at the devil went on to add, "God help me!" What will come to help me?

The big newspapers don’t have a conscience (he had bribed them often enough, through savvy intermediaries, to know that) and the little ones don’t count. The big writers wouldn’t believe me.

Here both idea and self are disintegrating. The abrupt conceptual shifts (from Freud to Martin Luther to newspapers) mirror the pronoun shifts (us, I, he, me). The idea of a conscience has suddenly ceased to have any substance, and yet D clings to it like a lifeline. Years of covert identities have dissolved D’s  present self, a process that mirrors his own statelessness and the coming historical catastrophe.

After the first section, the narrative itself fragments into pieces. The second section follows Daria’s journey from an isolated Kazakh village to the siege of Leningrad. The third section strikes even further afield, covering the final battle for Berlin. This section is the most unexpected and perhaps explains why Serge had such trouble finding publishers and readers during his lifetime: Serge, a dedicated Bolshevik, sympathizes with ordinary Germans to a degree that can get mawkish at times. Serge rewrites the Nazi period in Germany as a class struggle: ordinary Germans suffered greatly, while wealthy Germans survived the war with their properties and their political connections intact.

The final section sorts out the final fates of the main characters, whose storylines sometimes get lost in the historical shuffle. Despite their ontologically reduced states, D, Nadine and Daria embody the idea of humanism, which endures, but just barely. Serge died in Mexico shortly after completing the novel, physically and emotionally exhausted. Yet, he seemed made for strife. He was like a raw nerve experiencing some of the darkest episodes in modern history like a raw nerve. It’s as if he couldn’t live in peacetime. Unforgiving Years is Serge’s most personal novel in the sense that it’s about a mind under the stress of war, looking for core beliefs while facing the existential void.