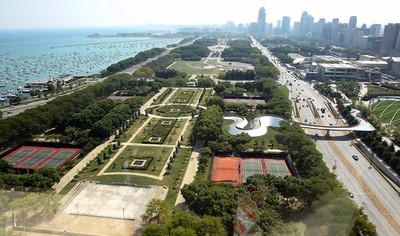 Underground buildings are now all the rage in Chicago. Helmut Jahn, for instance, recently released his design for an underground library at the University of Chicago. But for a building style that tries to be unobtrusive as possible, unless you’re a mole, underground buildings are meeting with stiff resistance from locals. Mayor Daley has been pressing for a children’s museum in Grant Park, but residents in the neighborhood, or whatever you want to call the cluster of highrises springing up at the north end of the park, are objecting, loudly, about the increased traffic and congestion the museum would bring to an already crowded corner of the park. Yesterday the Chicago City Council’s zoning committee took a bold stand and ditched a vote on the Children’s Museum because not enough aldermen showed up for the hearing, no doubt fearing getting whacked by the mayor if they voted against the proposal.

There’s an even more powerful figure opposed to the Grant Park site: Montgomery Ward. He’s been dead now for 95 years, but he still has lawyers eager to enforce his wishes that Grant Park be free of buildings. Hence Krueck & Sexton’s underground museum. The architects have had to throw a few more shovelfuls of dirt onto the building in order to comply with court orders. The entry pavilion, for instance, has been reduced to a quarter of its original size and moved to a spot that’s technically outside the boundaries of the park. A sort of skylight pit has been reconfigured so that it’s more of a terrace, partly to open it to the public, and partly to make it look less like a grave site.

Which leads to another problem with the site: the image of smiling children being led to an underground bunker. Blair Kamin is one of many people who have wondered about the effects of the museum on small children’s psyches. "What would it be like for that child—a 3-year-old kid in a stroller,
say—to be in a building that drops as far as 48 feet below street
level, down where there is now a depressing, concrete-walled parking
garage?" he asks. "Would it be inspiring or dreary? Uplifting or scary?" This is a valid question, but one that’s hard to answer. My three-year-old son is convinced our finished basement is inhabited by dragons when the lights are off, but he likes to play down there when the lights are on. He also doesn’t like the early morning sunlight filtering into our living room; he complains that it’s too bright.

If Krueck & Sexton want to make the subterranean museum palatable to small children, they should place a large Hot Wheels track just inside the front door. That will get my son’s approval, at least. I’m guessing nine out of ten three-year-olds will buy into the proposed museum site if the finished building has enough distractions inside. But getting to the museum is another matter: kids don’t like crowds, and they don’t like parents cranky about trying to find parking in Grant Park. Nor do they like to trudge across the Loop from the train stations. But Mayor Daley will be happy, and no one wants to be around when he’s unhappy.

PS: Thanks to the Tribune for the photo of the proposed site in Grant Park.