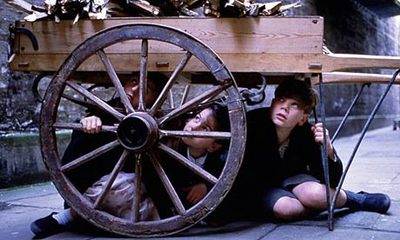 It’s often been said that Britain would have a thriving national cinema if everyone in the United States spoke Spanish. The British director Terence Davies reiterated that point recently at Cannes, where he’s showing his latest film, Of Time and the City. "If we are going to have a national cinema we have got to make stories which arise from our islands," he told the Independent. "What we do most of the time is make sub-American nonsense. The American template is very often lousy – why do we want to imitate it?" He goes on to denounce native talent he considers "third rate," singling out Ricky Gervais, one of the most widely imitated British comics in the US.

I haven’t seen a Davies film since he spoke after a screening of The Long Day Closes at a film festival in Philadelphia in 1992. I remember that film, as well as Distant Voices, Still Lives (still above) as having a distinctly un-American stillness to them. They are quiet films so confident in their formal integrity, so enamored with the past and with their own Britishness, that one overlooks the boggy ground of nostalgia upon which they are based. I remember leaving the screening of Distant Voices impressed by Davies and his film, both of which radiated integrity, but at the time I thought there were other British directors doing much more exciting and innovative work, all without imitating in any conspicuous way American-style filmmaking. This was the time when Stephen Frears, Mike Leigh, and Peter Greenaway were still working at the top of their game. Alan Clarke had only recently died. Middle-aged white guys didn’t have a monopoly on provocative filmmaking in a very specifically British context. One film that attracted a lot of attention during that time was Pratibha Parmar’s documentary Sari Red, about a young Indian woman killed in a 1985 racist attack in England. Davies, by contrast, seemed timid, out of touch, and closer to the venerable if stuffy tradition of the heritage film.

With the exception of Greenaway, British filmmakers of the late Thatcher period were interested in exploring contemporary post-colonial British life. Davies’ own filmmaking practice suggests that making stories that arise from the British islands means retreating into a mythic past during which Britain was inhabited solely by white people who loved music halls. Davies is hardly a National Front filmmaker, but his vision of Britain and British filmmaking is narrow and retrograde. Of Time and the City, which is set in 1940s Liverpool, is another admirable film from this unprolific filmmaker, but it’s hardly an exemplary study of what Raymond Williams would have called the structures of feeling in post-Blair British life.