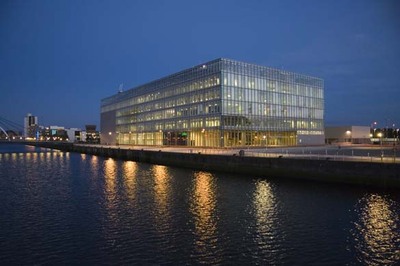 The Royal Institute of British Architects just named the best new buildings in Britain. Classicists throughout Britain are up in arms over the selection. Of the 92 buildings on the list, "there is not a doric column or a Tuscan pediment to be seen," according to the Guardian’s Robert Booth. Quinlan Terry, Prince Charles’s favorite architect (enough said there), calls the awards "a con" and accuses the RIBA of being "style fascists"–never mind actual fascists’ love of classical architecture. Terry has protested the awards by refusing to submit an entry.

Whatever side you take depends, I guess, on how you define "new." Richard Rogers archly comments, "modernism has always been a shock and it seems some people are taking a rather long time to recover." The Royal Institute has sufficiently recovered, it seems. The RIBA claims that only architectural quality was considered, not style.

So not a single neo-classicist building is among the top 92 buildings built in the UK in the past year? That seems improbable. I’m a partisan on the side of modernism, but I wonder if 92 praise-worthy modernist buildings were built on the entire planet in the past year.

If their comments are any indication, the RIBA like their buildings large and just a touch peculiar. Heatherwick Studio’s East Beach Cafe, designed to look like flotsam, is "both strange and captivating; weird but lovable." Ian Simpson’s slab highrise in Manchester is a "landmark 50-storey tower" with "the excitement and bravura of the Manhattan tradition." David Chipperfield’s BBC Scotland building in Glasgow, pictured above, is a  "singularly awe-inspiring volume." Maybe you have to be there; in the photo, it looks like a storage container.

Maybe ornamentation is a sin and monumentality is an eternal architectural value, but so are balance, harmony, and proportion. Modernist buildings, when they are good, have these properties. These are also neo-classical values. Either Britain’s disgruntled classicists have forgotten these verities, or the RIBA has.