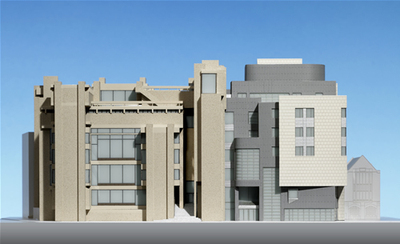 The Yale School of Architecture is finally remodeling its irascible building and renaming it after its original architect, Paul Rudolph. The remodeling project includes an annex designed by Yale alum Charles Gwathmey.

Brutalist buildings like the Yale arts complex look like they will last for ever, which is a blessing or a curse, depending on how you feel about them. And yet, they need upkeep like any other building–maybe more, since they are rarely the objects of loving attention. Even though it’s located on the campus of one of the wealthiest universities on the planet, the Rudolph building has suffered neglect, some half-hearted remodeling efforts, and an arson attack.

All will be well, however, once Gwathmey applies his light touch to Rudolph’s confrontational building, infusing it with a post-industrial cool that the expressionist original lacked–and never wanted. The project is more than just a gentle corrective measure, though. It also marks how much architecture in the academy has changed since the Yale building was completed in 1964. At that time Rudolph was the architect-rebel imposing his vision on a disorderly and hostile world. He’s been succeeded by Gwathmey, the starchitect burnishing the Yale brand.

When Rudolph was dean of the Yale School of Architecture in the late 1950s and early 1960s, architecture was still in the process of professionalizing. Like the legal profession before it, architecture was moving from an apprentice system to a professional training one. Brutalism fit perfectly into this transformation. It was counter-intuitive–there was beauty, or at least dignity, in concrete–in the same was physics had been since Einstein. Architecture in the academy acquired the same cutting-edge mystique as the hard sciences and, as a result, assured its own place in the university.

Charles Gwathmey is the product of that transformation, but the transformation itself is complete. Because he’s designing for a self-confident institution, Gwathmey’s architecture is much more experiential and sensual. It offers a tour of all the pleasures high-end architecture now offers. So with the remodeling, Rudolph Hall will change from an emphatic statement to a historical narrative.