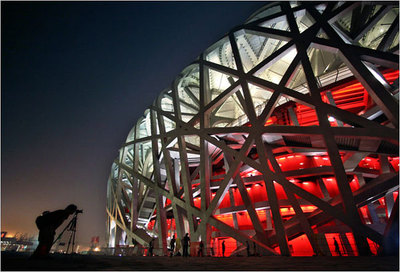 Is it okay for an architect to design a building in a country ruled by an autocratic government? "It’s complicated," Thom Mayne says. And indeed, it is. Daniel Libeskind recently denounced his fellow architects for working in China, and others have complained about Western architects aiding and abetting Dubai’s building frenzy. If there’s a conclusion to the debate outlined in Robin Pogrebin’s New York Times article, it’s that architects can accept commissions from autocratic countries if the end product expresses a popular longing for democracy. The building should not endorse or reflect the values of the autocratic regime itself.

All kinds of ambiguities emerge from this position, so it’s worth consulting Alain Badiou’s Ethics: An Essay on the Understanding of Evil

, a book I discussed at length earlier. Badiou argues that we only have an ethical obligation to the truth. He rejects ethical positions founded in adherence to abstract ethical law or respect for otherness as conformist at best and nihilistic at worst. Conventional ethics, Badiou says, merely flatter our own beliefs and preconceptions while treating the victims of evil with condensation, even contempt. You can see these attitudes in many recent discussions of the tremendous growth of developing world cities: essays on the new urban hypermasses are full of terrifying statistics and hand-wringing pity. "We’re all in this together!" is the general refrain, but the squalor is always somewhere else, in less well-managed–and less virtuous–portions of the world. Meanwhile, in the West we’re keeping our part of the planet tidy. We’re buying hybrid SUVs; why can’t they show the same self-restraint?

The essential divisiveness of conventional ethics is exactly what Badiou attacks. An ethics of truth involves compiling the concepts that speak to and for everyone, regardless of their interest, privilege, or national identity. In order for something to be true, it must be true for everyone. But preconceptions like the universality of human rights must also be put aside. The ideal of universal human rights, Badiou claims, begins with the assumption that people are victims. Life doesn’t produce anything affirmative or new; it’s merely the postponement of death.

Once we bracket human rights, respect for otherness and all the other idealist baggage, we can see our situation clearly as something unique. Badiou wants us to have fidelity to a situation and to its supplement, the event, which Badiou defines as a break with the past.  The event, Badiou writes, "punches a hole" in conventional knowledge. Not only does the true event disintegrate our preconceptions, it also creates us as subjects. We’re no longer just bodies huddling under the protection of human rights. The ethical subject follows Lacan’s injunction to keep going, to never give up on one’s desire. This does not, however, mean a desire for a elegantly-designed building in some Asian generic city. Because Lacan argues that desire is something we can’t ever fully know, consistency means never giving up on what one doesn’t know about oneself.  One must leave behind one’s own interests, which are shaped by our cultures, and give oneself up to future consequences.

What does this mean for an ethical architecture? After reading Badiou I would argue that simply holding oneself above mere politics is evasive. A more ethically truthful practice, one that’s more oriented toward the real, is to consider each project as an event with unforeseen consequences. Jacques Herzog is closer to this position when he argues that his Olympic stadium in Beijing, designed with Pierre de Meuron, "will change radically — transform — the society." He asserts, "Engagement is the best way of moving in the right direction."

Herzog and de Meuron earned a lot of money ($13 million, or thereabouts) for their Beijing stadium, and they had to undergo some humiliations to land the commission, so their position could be dismissed as a rationalization. And yet, by simply categorically refusing to build in countries that do not conform to some undefined standard of governmental behavior is to leave change to others, which is the same as denying that it will happen at all. Herzog makes an extravagant claim when he says  single building will radically transform a country of nearly a billion and a half souls. But drop a giant bird’s nest in the ancient imperial capital and something is bound to happen, even if the result doesn’t fully conform to the norms of universal human rights. Without engagement, nothing will change.