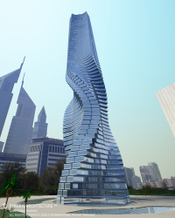 David Fisher has evidently given up on erecting the world’s first whirligig building in Chicago. He will instead build his rotating tower in that magpie of cities, Dubai. The concept is simple: a seventy-eight story building, with each floor rotating 360 degrees at the whim of the unit owner, or nature, or the state of the oil futures markets, whichever. The promotional video is portentous, but it’s vague on details. In Fisher’s New York press conference he declared, "Today’s
life is dynamic, so the space we are living in should be dynamic as well. Buildings will follow rhythms of nature. They will change
direction and shape from spring to summer, from sunrise to sunset, and
adjust themselves to the weather. In other words, buildings will be alive." But in the video says each floor will be fully controlled by its owner–presumably one per floor–even as the building rotates with drill team coordination. If the rotating tower has a practical application other than testing for motion sickness, it would be avoiding having to look out on the workers’ slums on the outskirts of Dubai.

The rotating tower is a gimmick, of course, but a harmless one. We’ve been building static structures for several thousand years, so by now technology should allow us to construct dynamic buildings. Then again, it’s not really clear why we would want our buildings to morph into shapes that signify nothing other than their ability to pull off the same trick indefinitely. We already have buildings that change form–stadiums and convention centers, for instance–so Fisher’s idea isn’t so revolutionary. He’s created a new set of architectural tropes, and some interesting marketing material, but it will take an architect of greater imagination to make something more out of the dynamic building idea. Otherwise, it’s a dead end.