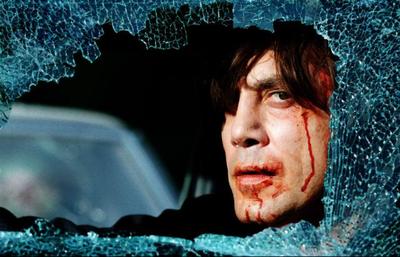 In the latest issue of Film Quarterly Leo Braudy invites us to consider what the Coen Brothers’ adaptation of Cormac McCarthy’s No Country for Old Men "is actually about." (The article in PDF format can be found here.) Braudy points out that the film is a hybrid of the Western and the film noir genres. Like the standard Western, the film is a law and order drama, but the sheriff fails to clean up the frontier town. We’re meant to read sheriff’s petulant refusal to put much effort into tracking down Anton Chigurh or protecting Llewellyn’s wife as a commentary on the madness of contemporary American culture. Braudy, though, sees McCarthy’s novel as embodying all the qualities we’ve grown tired of in Hemingway, with melodrama substituting for Hemingway’s ethical stringency.

The noir side of No Country is distinctly postmodern. Llewellyn gets mixed up with a dark criminal plot, but with all the causal connections severed. The Coens are very faithful to the plot of the novel, meticulously reproducing its unsettling structure. At the center of the narrative is the inert sheriff, traversing time but not space. Chigurh moves with implacable, and terrifying, linearity. Llewellyn lurches wildly from place to place in a barely contained panic. Llewellyn’s story comes to an abrupt and perplexing end when a band of raucous killers emerge from nowhere to slaughter him in a hotel room. The killers have never appeared in the story before their grisly mission, thus violating the conventions of both the classical Hollywood storytelling and the thriller novel genre. Llewellyn’s death occurs shortly after the sheriff has consulted with an older lawman who dismisses the sheriff’s brooding about the senselessness and brutality of modern crime as "vanity." The sheriff’s world view is brutally reconfirmed, though, in Llewellyn’s sudden death. The viewer’s shock, disappointment, and exasperation closely parallels the sheriff’s more generalized feelings.

Braudy compares McCarthy’s lurid fascination with unmotivated violence to Micky Spillane. To my mind, McCarthy’s fascination with randomness places him in a somewhat different tradition: the high postmodernism of Paul Auster and Thomas Pynchon, with their sour paranoia and jangly plots. In an age of high concept terrorism, though, stories of inexplicable crimes no longer have the same resonance. Indeed, the drug deal gone wrong that sends the sheriff into a downward existential spiral seems quaint, almost nostalgic. Perhaps this is why the story is set in the 1980s.

Regardless of how you feel about either the novel or the film version of No Country, one would have to grant, I think, that the Coen Brothers’ adaptation of the novel is unusually skilled. But Braudy objects, validly, that the Coens drained Chigurh of his soulfulness and added too much Coenesque humor. These are related problems, I think. Chigurh is a fascinating character, one of the great villains of contemporary American fiction, and he holds the novel together. (Llewellyn never lives up to his introductory descriptions; instead of a cannily inventive hero, we get a dully efficient problem-solver.) The Coens’ comic set pieces are supposed to offer relief from the grim circumstances of the story, but the comedy ends up confusing our emotional reactions to the action of the story, rather than clarifying them. Like the novel, much of the pleasure of the film comes from watching Javier Bardem’s Chigurh kill nearly everyone he meets. Almost without exception the humor arises from the confrontation with death. We’re chortling over madness, to paraphrase a remark from Pauline Kael, intensifying rather than alleviating our guilt over the pleasure of watching a sociopath.