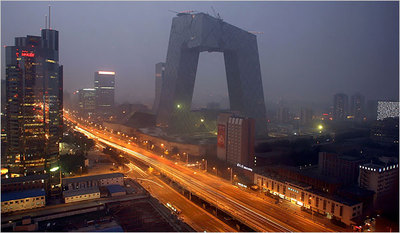 In his front page article on Beijing just before the opening of the 2008 Summer Olympics, New York Times architecture critic Nicolai Ouroussoff likens his arrival in the city to the early Modernist architect Adolf Loos’ arrival in New York early in the twentieth century. When Loos "stepped off a
steamship in New York Harbor" Ouroussoff writes, Loos realized that he "had crossed a
threshold into the future; Europe, he realized, was now culturally
obsolete."

Ouroussoff is hardly alone in seeing the 2008 Olympics as the harbinger of a Chinese century. This is exactly how the Beijing government wants the world to see the Olympics: an emphatic announcement of the inevitable ascendancy of China to world economic supremacy. This is mythic history in Walter Benjamin’s sense: that nations rise and fall according to regular if mysterious historical laws that have nothing to do with any conscious collective intent. History has decided that the twenty-first century will be China’s, just as it decided that the twentieth was the USA’s. With its economic momentum too great to be resisted, China will surpass the United States as the largest economy in the world some time between next Christmas and the next century, depending on who you ask.

The air of inevitability surrounding China’s ascendancy overlooks the daily accounts of unrest in the provinces. One could argue that Karl Marx’s historical dialectic isn’t done with China, that the nation is one or two angry monks away from a general political collapse. In ten years we could be looking back at Beijing’s shiny new buildings as tokens of what might have been, just as we did a decade after the Sarajevo Winter Olympics.

In his study of the nineteenth-century world exhibitions, the precursors of the Olympic festivals, Benjamin noted that the world exhibitions all created spectacular architecture–the best known structure is the Eiffel–intended to express national and technological progress. One of the exhibitions’ most powerful illusions was that progress was inevitable, even irresistible. But the exhibitions had nothing to say about the social and political conflicts that beset the host nation, which continually deferred the exhibitions’ promise of material abundance and technological wizardry. In effect, culturally iconic buildings contained the seeds of their own undoing. In the Arcades Project, Benjamin found that historical contradictions were embodied in the forms of grand public buildings themselves, and not simply in the contrast between the monumental buildings going up in Beijing and the clusters of ugly highrises being thrown up throughout the city.

Perhaps the most enigmatic and symbolically complex new building in Beijing is Rem Koolhaas’s headquarters for the CCTV, pictured above from a NYT photograph by Doug Kanter. The building completely eschews the old Renaissance ideal of a structural proportion based on the human body. Indeed, the individual body has no place in Koolhaas’s design. The twisted form means one’s relationship to the building is constantly uncertain; it has no clearly demarcated entrance, no sense of when one floor ends and another begins. The soaring height of the traditional skyscraper, with all the symbolic power it evinces, is truncated. The complex form of the building suggests it is loaded with symbolic meaning, but the meaning is opaque–much like the status information apparatus housed within. The cantilevered section is a reminder of the precariousness of the state’s monopoly on information–not to mention the fragility of Chinese construction techniques.

The symbolism of Jacques Herzog and Pierre de Meuron’s Olympic stadium is much clearer. It’s an explicitly Utopian space, an attempt to reconstruct the pre-uprising Tiananmen Square in its combination of the public and the intimate. Stadium are retrograde forms, however. The Beijing stadium is closer to the old imperial spectacles than to our current networked world. It’s fitting, then, that China has chosen to place so much symbolic weight on a stadium with massive steel supports. The nation’s wealth derives largely from forms of mass manufacturing that the United States left hehind thirty years ago.

This can be seen more clearly in a comparison between Herzog and de Meuron’s design to Skidmore, Owings and Merrill’s stadium design for Chicago’s 2016 Olympic bid. One of the distinguishing design features of the Chicago stadium is its giant posters of past Olympic heroes. The SOM design recognizes that stadiums are really containers for representations of sporting events, not the manifestation of national identity. The Chicago stadium is a product of a much more thoroughly commodified society than the Beijing stadium. In this way the SOM design is more advanced than Herzog and de Meuron’s bird’s nest.

We can’t build stadiums like the Beijing Olympic stadium because we no longer have the kind of culture that expresses itself in a new stadium form. We keep rebuilding the same retro ballparks because they look good on television. The Beijing Olympic stadium and the CCTV tower are at once cutting edge and archaic, giving form to a culture in which manufacturing technologies and economic relations are well ahead of social relations. These buildings point to a national longing for ascendancy that will take a yet to be determined form.