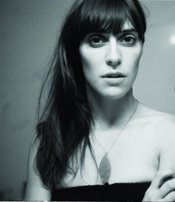 Last Friday evening my wife and I were sitting in our lawn seats at Ravinia listening to a concert by Feist when the woman sitting in front of me suddenly turned around. "Have you ever heard of this Feist woman before tonight?" she wanted to know.

The woman was between 50 and 120 years old, showing a plunging neckline and collagen lips. She was wearing the sunglasses she would still be wearing at 11:00 PM. She was very drunk. She was one of those assertive North Shore types, so I knew I’d better have some answers, and they better be good ones.

She scowled. "Where is she from?"

Apparently satisfied with that answer, she abruptly turned around and resumed concentrating on not falling out of her chair.

I could have added that Feist is best known for her appearance in an iPod Nano commercial in which she’s a one-inch tall woman dancing fetchingly to a bouncy tune. However, earlier I had overheard the woman’s husband and twentysomething daughter trying to explain this to her. "What’s an iPod commercial?" she asked.

I also could have told the woman to stop asking so many questions and just enjoy the show. However, hardly anyone else was. The very large crowd was overwhelmingly female, and they couldn’t sit still. I was astonished. On the ride up I was only one of three men on my car on the express train to Ravinia Park from downtown Chicago (my wife met me at the park). The car was standing room only. The guy behind me had his pickings of the entire car, but as is usually the case during these situations, he couldn’t focus, so he ended up flitting about, hitting on every woman within earshot. He had plenty of opportunities; one woman in the aisle began juggling three balls, a novel but effective flirting technique. His lines, though, ranged from the ill-advised (he told a German tourist, "I’ve never been out of the country!") to the desparate ("Today is my birthday."). The third guy in the car wasn’t making matters any easier. At one point he told him, "That’s German for I wish this guy would leave me alone."

The train ride up led me to expect a large, rapt crowd once the concert began. It was a large crowd all right, but a restless one. A constant stream of people passed by our eight square feet of lawn space. Ravinia is notorious for distracted audiences, but this indifference was striking. At one point I got up to see if the pavillion audience was paying any attention. People were standing six deep at the back of the pavillion, so I peeked over their shoulders to see a few people milling about, but an otherwise people seemed to be listening. On stage, in the distance, was Feist herself, still only one inch tall.

And what was the music like? Hard to say, exactly. The sound system on the lawn was poor, and her band was easygoing in the coffeehouse tradition, so neither melodies nor rhythms were enunciated very clearly. Feist got the iPod song out of the way immediately, rushing through it as the second song in her set. "Gatekeeper," a lovely song, came through eventually, but not as seductively as it does my iPod. I couldn’t tell if Feist’s folky music was simply lost in the shifting masses of Ravinia or if her limits were on display. Some of the music came across as the edgy drone indie rockers resort to when they run out of ideas. Clearly, though, she had a hard time commanding a large crowd.

The music was the least memorable part of the evening, which is too bad, because Feist is an appealing performer. The experience made me wonder how important the music itself is when we attend a concert. Certainly this varies by genre and circumstance. People usually sit still for folk music, I would think. (I don’t especially care for it, so I’m guessing here.) Maybe sitting in a lawn chair drinking wine under a cloudless summer sky doesn’t lend itself to concentrated listening regardless of who’s playing. That may be the point: I’ve always had the impression that summer music venues like Ravinia were the equivalent of a summer lifeguarding job for musicians. In any case, when and if I ever see Feist perform again, I’ll make sure it’s a small, indoor venue.