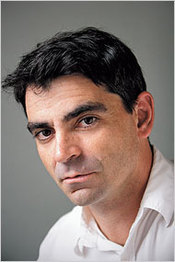 is yet another 9/11 novel, but it refers to the event obliquely–the only way a trauma can truly be represented. The action picks up around 2003, during that troubled sleep period between the Towers falling in New York and the bombs falling in Baghdad. Our narrator is a Dutchman named Hans van den Broek who lives in a TriBeCa loft with his British-born wife, Rachel, and their son Jake. The family is chased from their loft on 9/11, and they never return. Rachel decides she’s had enough of TriBeCa, New York City, the USA, and much of humanity, including, and especially, the meek Hans. She returns to London with Jake, leaving Hans behind in the family’s refugee camp, the Chelsea Hotel. Hans spends his days in a fugue state, working listlessly as an equities analyst and returning nightly to his wife and child’s London home through Google Earth, peering into the “depthless” pixels for traces of his former life.

Hans’ life is saved by cricket. He played the sport as a boy in Holland, and in New York he finds a cricket underground of West Indian immigrants. His guide through this underworld is Chuck Ramkissoon, who is a sort of impresario of the American immigrant experience. Hans accompanies Chuck as the latter tends to his cricket pitches and his numbers rackets, both of which are located deep in the outer borough immigrant space. Superimposed on the vibrant immigrant space is an imaginary landscape of the Dutch settlements in and around New York City. The juxtaposition between vibrantly present immigrants and a vanished people is both compensatory and Utopian–what New York was, and what it might become again.

Meanwhile, back in London, Rachel nurses a number of grievances that she relays to Hans in long-distance phone calls. In one memorable tirade she lumps poor peaceable Hans with George Bush’s imperialist adventures simply because Hans lets himself sink into the depths of American experience. It’s not really clear why Hans wants to be reunited with this harridan other than a desire to see his son again. The boy is another example of a fictional child who functions like a ring boy in a wedding: he serves a structural purpose, but he’s not allowed to be a kid.

On the plus side in the characterization department, Chuck is a great character: dreamy and authoritative, loquacious and enigmatic, charming and irritating.  Hans is a little in love with him; even Rachel intuits this. A family romance starts to form in Hans’ head between Chuck and Hans’ mother, although the two never meet. It’s a sign of Hans’ healing, his reconnection to life as it is actually lived, that he finally returns to his real family in London. Even here, though, we feel a bit sorry for him. He deserves a better match.

If Rachel is a bit of a cipher, we learn a whole lot about cricket. Fortunately, it’s an interesting subject, in O’Neill’s hands, anyway. Cricket is a sport, a state of mind, a civilization unto itself. At one point Chuck suggests that the terrorist attacks of 9/11 weren’t cricket. They would be unimaginable in a world where everyone played cricket.

That Chuck is found one day face down in the Gowanus Canal, his hands tied behind his back, suggests that the pristine world of cricket is very fragile. This second trauma, however, has a way of complementing the first one, as if one more sacrifice were necessary before everyone get return to living their lives. Because of this traumatic structure, Hans’ story has a therapeutic form. Three quarters of the way through the novel, as Hans re-engages with Rachel, the therapeutic form threatens to undermine the historical resonances O’Neill has carefully built up. O’Neill extricates himself from this predicament with a bit too much haste, but the ending is powerful nevertheless. What finally emerges is a restoration of hope and, much more remarkably, innocence. The pre-9/11 New York is just another vanished world among many others throughout history. But each lost world, O’Neill suggests, is replaced by another, larger, more expansive world, but one tempered by the burden of memory.