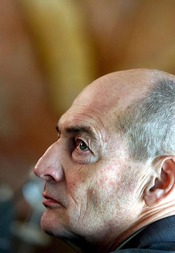 Rem Koolhaas’s recent interview with Der Spiegel raised more questions
than it answered, which is, I suppose, a sign of a good interview. If
there’s a theme to Koolhaas’s remarks, it’s that architects need to
break out of their Euro-centric conventions and pay more attention to
local conditions. That, and green architecture is a farce.

The intellectual force of the West is still dominant, but other
cultures are getting stronger. I expect that we will develop a new way
of thinking in architecture and urban planning, and that less will be
based on our models. […] The unanswered question is whether our
cooperation, this
internationalization, will result in a common language of architecture,
whether we will speak two different languages or whether there will be
a mixture of the two.

Perhaps, but how will we tell the difference
between the languages. When the new cities of the
Americas–Philadelphia, Savannah, Annapolis and others–were laid out
in the seventeenth and eighteenth centuries, they were designed
according to European Enlightenment ideals, but because no major new
cities had been built in Europe for centuries, these designs came to be
associated with the American city. To what extent is Savannah European,
and to what extent is it American?

A
more ambiguous concept is the urban. Despite Koolhaas’s earlier
declarations that urbanism is an outdated ideology, his Waterfront City
project in Dubai is "a true metropolis," a "a true public space"
complete with the accouterments of the nineteenth-century European or
American city: "a court […], hospitals and the terminus
stations for two subway lines." Koolhaas proudly declares that his
Waterfront City will combine the "ingredients of what characterizes
Dubai, but also a real urban life."

So
has Koolhaas, the theorist of the generic city, gone New Urbanist? Is
he vying for the Driehaus Prize? Probably not, but he does acknowledge
some "contradictions," explaining, "I am a critical spirit and an
architect at the same time, and I do not
feel obligated to constantly validate my own theories in my specific
work."

One theoretical block he continues to maintain is
against sustainable architecture. He dismisses green architecture as
"an empty formula" so that he claims he can’t  "think about ecology
without becoming ironic." True, the sustainability movement in the
United States is fraught with contradictions, ambiguities, and plain
absurdities. The Dutch, who’ve long had among the highest energy costs
in the world, can yawn over green architecture, but with our new $4 a
gallon gasoline, Americans have turned to green technologies with the
fervor of the newly converted.

Turning from the green to the
red, Koolhaas doesn’t directly address the issue of working for the
Chinese Communist government–and the interviewers don’t press him on
it–but he does have an interesting explanation for the showy buildings
that have been thrown up in the PRC and elsewhere. He claims that
architects nowadays don’t get enough time to research local conditions,
so they resort to imitation and an "excessive compulsion toward the
spectacular." As an antidote he suggests "a return to simplicity." But
Koolhaas’s CCTV Tower in Beijing, by his own description, is anything
but simple. He proclaims the CCTV Tower has no fewer than "400
identities," all in the name of escaping "the constraints of the
explicit."

Koolhaas can be excused for his contradictions
because he’s speaking in an edited interview with a popular magazine.
He’s just tossing out ideas without worrying too much how they add up.
He offers broad guidelines for how we’re supposed to read his books and
look at his buildings, but together these texts are like modernist
literary works: they contain, rather than resolves, their
contradictions.