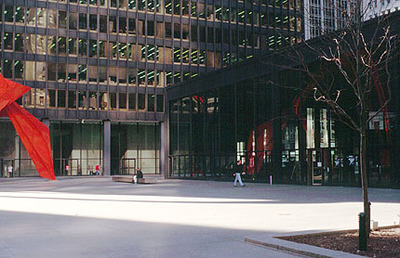 One of the
requirements to be a top-level architect these days is to create designs that in engage
with broader cultural and social trends, usually technological and
media-related. Enríque Norten’s Rutgers
campus is just such a project. So is Rem Koolhaas’s Seattle Public Library.

However, architects’
forward-looking conceptual designs
neglect something much older–as old as architecture itself: the civic.
Buildings are things within towns and cities, exerting influence over
collective praxis (or just the unrelated praxis of the masses, if you don’t
feel comfortable talking about collective practices).
Cass Gilbert’s Supreme Court Building in Washington, DC deliberately invokes
the neo-classicism of eighteenth-century America, a style meant to connect the
young republic to the ancient roots of democracy. The famous white steps and
sculpted pediments have a clear ceremonial meaning. In the Enlightenment style,
the building stands slightly aloof from the urban pell-mell around it. The
Supreme Court is a temple of rationality amidst the passions of the urban
crowds. This Enlightenment principle is reversed in Mies van der Rohe’s Dirksen
Federal Building (1964), which houses the United States Court of Appeals for the
Seventh Circuit. Only a thin glass
membrane separates the court from the commercial heart of Chicago. Before the
security shakedown was imposed just inside the doors, lawyers never broke
stride walking from their offices to the courthouse elevators.

Mies’s Dirksen
Building doesn’t look like a traditional courthouse, but it’s certainly a
familiar form in Chicago, one of the birthplaces of modernist architecture. The
building imposes the same sense of stillness and contemplation as a
neo-classical structure, so at the experiential level, the purpose and intent
of the Dirksen Building is immediately understandable.

The same cannot be
said of some of today’s most aesthetically advanced buildings. In many cases, the sheer presence of a
building within a city or a town needs be justified. The more far-reaching the
design, the more attention-grabbing the form, the more the building is likely
to find its reason for being in writing.

Take, for instance,
Danial Libeskind’s Michael Lee-Chin Crystal at the Royal Ontario Museum and
Koolhaas’s CCTV building currently under construction in Beijing. Although vastly different in appearance, they both
evince a cryptic symbolic register. Why do the buildings take the form they do?
How are we supposed to respond to them? Is there any way to move beyond the
shock experience of our first encounters with them to something more meaningful
without resorting to the architects’ densely-written explanations of the
buildings’ forms? There’s nothing inherently wrong with Koolhaas’s desire to
avoid the explicit. However, the CCTV building is largely indifferent to
its immediate urban context, but the building is entirely dependent on
Koolhaas’s writing to confer civic meaning upon it. Would Waterfront City in
Dubai ever have been commissioned if it weren’t for Koolhaas’s
"architectural novel" S,M,L,XL?
Probably not.