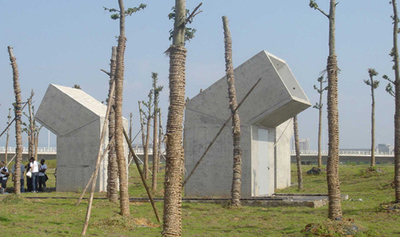 The Los Angeles Times‘ architecture critic Christopher Hawthorne asks an interesting question about building in the New China: Is there a middle ground between carpetbagging Western architects and domestic hacks? Subscribing to a dubious historical narrative that says China’s ascension to economic and cultural superiority is inevitable, Hawthorne asserts that "If you were asked to wager on the country that will produce the world’s
next great architect, you’d be foolish not to consider putting your
money on China." One candidate to be the next Frank Lloyd Wright is Xu Tiantian, who is 29 and already hip to the Western fashion for lower-case letters to connote cool: her firm is called DnA, for Design and Architecture, as if design and architecture had only just been invented. (DnA’s JinHua Architecture Park, in Zhejiang Province, is pictured above.) If I were to place a wager it would be that she’s more likely to get a tattoo than a Pritzker.

Because of China’s current building boom, Xu is constructing buildings as fast as she can draw them. Hawthorne implies that the frantic pace will force Xu to drop the inhibitions and self-consciousness of Chinese architects and create something utterly unique. If she can break through to a genuine synthesis of Western and Chinese architectural styles, then she truly will be another Frank Lloyd Wright.

Western architects had roughly a century of uninterrupted time to elaborate the first iron and glass forms of the Paris arcades into the International Style of skyscraper design. Post-Qing Dynasty architects had 20 years to solve the same problem, and failed. Xu is supposed to solve the problem in a year or two. It’s as if the Chinese have to invent a new way of constructing buildings at the same rate Apple introduces new iPod models.

If it remains to be seen if young Chinese architects can really find a middle path between the Forbidden City and the generic city, they have already learned one lesson from their Western counterparts: buildings aren’t real until they’re written about. Hawthorne writes,

I heard a particularly telling anecdote during my visit: that one of
the city’s rising young architects, after producing some gorgeous
renderings of a proposed building, hired a U.S. architecture student to
write up a few paragraphs of dense theoretical text to explain it.