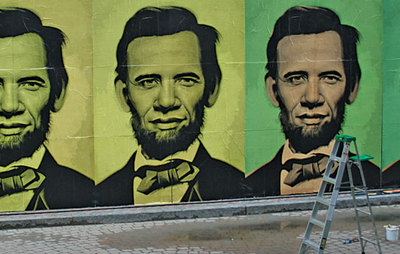 Jen Graves reports in The Stranger on a weird and, even if you’re an Obama supported like myself, not an entirely welcomed phenomenon: Obama art. There’s been a boom in artworks featuring the likeness of the presumptive Democratic nominee. Most of the images are laudatory, although, as one might imagine, there’s also a cottage industry of crude anti-Obama videos on YouTube.

Most of the Obama art is at the fanzine level and sells briskly on eBay. Perhaps the best artwork to emerge so far is Ron
English’s Abraham Obama, copies of which have been plastered all over Boston (and above). Graves has reservations about English’s Lincoln/Obama mashup, and rightly so. She points out that iconographic art disappeared just as totalitarian propaganda art appeared, so there’s something vaguely creepy about Obama art.  None of the PhotoShop Obamas possess the lacerating wit of great political art, such as Andy Warhol’s green Nixon. English’s image is slickly professional (it was orginally commissioned by a clothing retailer), but most of the Obama art is amateurish. It’s harmless, and it’s good to see that the enthusiasm for his candidacy continues unabated. On the other hand, all those weirdly morphed Obamas threaten to clutter up a still indistinct profile of the candidate with junk.

Grave warns us that the whole Obama art industry will crash if The One loses the election. (Plus, people will have to tear up those irritating "got hope?" bumper stickers.) They’ll become little tokens of disappointment, like those people who still drive around with John Kerry bumperstickers. But even if Obama wins, the Obama iconography bubble will only remain intact as long as Obama himself continues to produce iconic images like the one of him addressing a sea of Berliners. If he becomes president and starts making real-world choices like allowing offshore drilling and presenting his plan to clean up the mortgage mess, he will be represented like any other president. In other words, the more real he becomes, the less likely he will be the subject of artistic representations.At that point, Obama will start to look like all those presidents on the dollar bills.