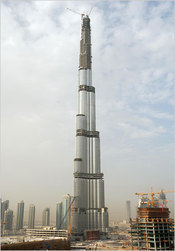 The Burj Dubai recently became the tallest building in this universe, and probably several others as well, but its developer, Emaar Properties has refused to say how tall it will eventually reach, so that something as solid and finite as a building can have the dramatic tension of a movie. Emaar doesn’t expect the Burj to make money. Really, the supertall building has no real purpose other than to cancel out the null space of the desert beyond Dubai’s city limits. Emaar has shifted its profit projections to lessor buildings to be constructed within the Burj’s orbit. It’s like constructing a McMansion so you can assemble a profitable lemonade stand.

The Burj’s architect, Adrian Smith, has also moved on, bored by the infinite building. He tells the New York Times‘ Fred Bernstein the Burj is already “in the past.”  Smith is ready to construct buildings that soar beyond the Burj, any urban realities, or earthly needs.  He predicts that another Persian Gulf building will surpass the Burj in five years, or when you pay $200 to fill up your Camry, whichever comes first. Smith established his career at the sober, button-down Chicago office of Skidmore, Owings & Merrill. He left SOM to start his own firm, which specializes in petrodollar supertalls, perhaps the most unnecessary buildings in the world. Smith’s most prominent American project is retrofitting the SOM-designed Sears Tower, a mulligan of a building when it was completed in 1973. Smith has been commissioned to make the tower more energy efficient. Unfortunately, he’s not going to do anything about the elevators that seem to bump disconcertingly against their shafts as they ascend.

Smith promises that his Persian Gulf supertalls will be green because they have some wind turbines and  photovoltaic panels, much like GM now claims its lumbering SUVs are green because they shut down a cylinder or two as they hurl their three-ton masses down interstates. The supertalls will suck up untold tons of steel and concrete, which must be shipped thousands of miles on emissions-spewing container ships. The wind turbines will have to spin like dervishes just to power their own buildings, gleaming in 100-degree heat. The most significant green benefit will be concentrating people with unlimited credit in one place so they don’t have to drive to far-flung gated communities.

If the starchitect is someone who designs a building with all sorts of gewgaws when a glass box will do, Smith has become a starchitect squared: imbuing completely useless buildings with SOM’s corporate prestige modernism.