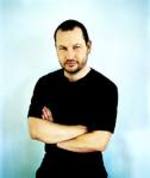 I’m bogged down in project craziness, so I’ll have to make it short today. Besides, this defies comment, anyway. Anne Thompson reports (via GreenCine) that Lars Von Trier is about to begin shooting his next film, called Antichrist, starring Willem Dafoe and Charlotte Gainsbourg. The press release, which Thompson calls "one of the strangest press releases to hit my inbox in many a long day," quotes Von Trier saying to us, "I would like to invite you for a tiny glimpse behind the curtain, a
glimpse into the dark world of my imagination: into the nature of my
fears, into the nature of Antichrist."

How did a director who started his career as part of the Dogma 95 collective, which was rigorously devoted to purging films from all mythologizing techniques, end up creating his own personal mythic order on film?