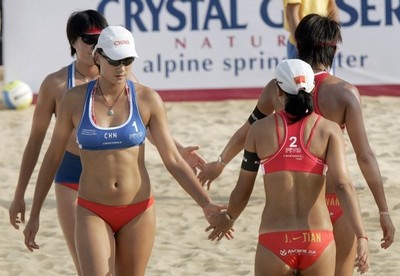 The Olympics are
finally over. Looking back, most of it seemed to consist of beach volleyball,
swimming, and baton-dropping. I’m still not used to the multi-channel Olympics.
My viewing pattern hasn’t changed since the days when ABC used to broadcast the
entire games in a few prime-time hours, with Jim McKay anchoring with the genial but slightly anxious air
of a father presiding over a slumber party. The broadcast would jump wildly
from boxing (two flyweights pummeling each other with white-tipped gloves) to
equestrian (Felicity Beckham-Posh of Great Britain prancing around on her horse
Penzance, with the announcers reassuring us this was all terribly difficult and
dangerous) to track and field (with American sprinters briskly handing off a
two-ounce baton).

I fell asleep before
the closing ceremonies came on the air, but I watched most of the opening
ceremonies, which demonstrated to an
amazed world that the New China was a land of terrifying goose-stepping
soldiers and cheesy pop stars. The Chinese organizers had no qualms about
admitting to creating virtual reality–flags blown by fake wind,
computer-enhanced fireworks for TV–to enhance an artificial image of
perfection to the outside world. Meanwhile, for internal consumption, CCTV, the main state television network, repeatedly showed footage of the
gold-medal match featuring the Chinese women’s team of Tian Jia and Wang Jie
against the United States team of Misty May-Treanor and Kerri Walsh. There were
Tian and Wang, in red two-piece swimsuits, making dives, spiking the ball and
high-fiving each other. On the other side of the net, the equally scantily-clad
American women touched or patted or hugged each other after every point, even
when they lost it. I can imagine them giving each other little pat-pat hugs for
successfully returning their trays to the cafeteria line.

If this was China’s
coming out party, then the new debutante economic power combines Soviet-style
obsession with medal counts with Western-style crass commercialism. After
winning only five gold medals in Seoul, the ruling Communist Party had made the games an organizing principle in
national life. This year the Chinese continued to dominate in diving,
weightlifting, badminton and table tennis. But they also won their first
Olympic gold medals in archery, rowing, boxing, sailing and trampoline,
Beijing’s contribution to the age-old question, How is that a sport? The
Chinese also collected their first medals in beach volleyball, synchronized
swimming, rhythmic gymnastics and field hockey. Overall, the numberology-obsessed Chinese won exactly 100 medals.

But unlike the
Soviet Union, in China a medal itself isn’t necessarily enough to move to the top of the queue for prime housing. Marketing is
an increasingly sophisticated tool in China, although as Lenovo’s weird flying
sumo wrestler commercials indicated, the Chinese have some things to learn
about marketing. Chinese athletes have picked up a lot of tricks about managing
their images and dealing with the media. The diver Guo Jingjing, the so-called "Princess of Diving,"
won two gold medals in 2004 in Athens. Since then her has been everywhere in
China: on billboards and in television commercials, not to mention the gossip
columns, which chronicle her relationship with the grandson of a Hong Kong
billionaire. Her Beijing golds earned her endorsement deals with McDonald’s, Coca-Cola, Toshiba, and a local milk
distributor.

Perhaps the face of
the 2008 Beijing games is Lin Dan, an officer in the People’s Liberation Army
and the badminton gold medalist. Super Dan, as he is known, is a heartthrob in
China, surely the only country in the world that considers badminton sexy. Super Dan competed in the men’s singles
gold-medal match under the adoring gaze of his girlfriend Xie Xingfang, who won
the silver medal in women’s singles for badminton. For
his largely female fans across China, he swatted his way to gold wearing spiky
hair and a pin of Mao Zedong on his shirt.