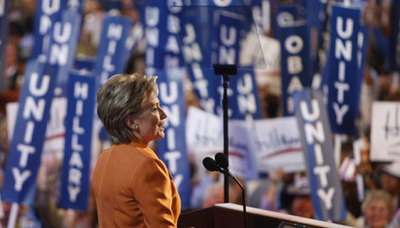 Her appearance is announced multiple times, like the arrival of a monarch. We’re shown a film with the same kind of
glossy black and white montage sequence advertisers concoct to soften the hard
edges of slightly disreputable multinational corporations. Then, Chelsea steps
up and gives an utterly minimal introduction, making one wonder if her parents
had been too protective of her. It occurs to me, though, that Chelsea is the
First Lady of the Clintons now, the one with the diffident smile and the
insincere wave, the dignified one who would really rather return to the
background. Finally, Clinton herself appears in an orange Lifesaver
pantsuit. The crowd goes crazy. You can practically hear her
saying to herself, Beat that ovation, Barack. In the reaction shot from
Michelle Obama you can practically see her mouthing the words, I’m watching you, bitch.

Hilary Clinton isn’t
a politician with many surprises up her sleeve, but unexpectedly she gets right
down to business, calling on her supporters to unite behind Obama. She even
delivers her best line early in the speech: "No way. No how. No McCain."

Alas, after that
mature and responsible opening, Clinton reverts to form. Someone in the
introductory film testified that Clinton had a great guffaw of a laugh, but
clearly she can’t laugh at herself, because no person with an ordinary ego
could relate with a straight face the story of the cancer victim who wrote "Hilary" on her
bald head.

When Hillary Clinton was First Lady I always thought  she was the victim of a vicious right wing
misogyny, but before a supportive audience she’s pretty insufferable. I did this, I did that . . . In the ethos of
her generation, I suppose, she comes across merely as a person who has long regarded
herself as an agent of historical change, a perfectly familiar position during a cultural upheaval. Clinton has mastered that ethical move in
which self regard leads without irony or hesitation to selfless liberal policy
positions. There’s something admirable about this ability, even reassuring. But this is 2008, not 1968, and her belief structure is
not as compelling as Obama’s own political wizardry.

You have to hand it
to her–she’s a practiced, gimmick-free orator. She conveys existential
certainty, but not true passion. There’s an odd rhythm to her speech. It’s
delivered just a little too quickly. She
never pauses to assess her own feelings. Her expression doesn’t vary much.
During the second half of the speech every point ends with a reference to
Obama, but the logic is always loose, more suggestive than reasoned, as if the
rhetorical path was supposed to lead elsewhere. She’s speaking at a dead end, and surely she knows it. The orange
pantsuit represents her immolation. No way. No how. No McCain: how could John
McCain be anyone’s second choice after her? All she can do is cede the floor yet again,
which she’s clearly tired of doing.