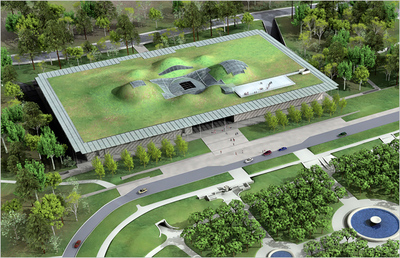 Newsweek’s Cathleen McGuigan declares, "I hate green
architecture." This isn’t actually true, as we learn when we read the rest
of her article. She has a point, though. The benefits of green architecture and
technologies tend to break down under analysis. McGuigan points to the 8.3 million-square-foot Palazzo Resort Hotel and
Casino in Las Vegas, supposedly largest LEED-rated building in the country.
Mother Earth does not another giant casino, green or otherwise. Plus, the
Palazzo is built in Las Vegas, the Hummer of American cities.

"I can’t stand
the hype," McGuigan continues, "the marketing claims, the smug lists of green features that
supposedly transform a garden-variety new building into a structure fit for
Eden. Grassy roofs? Swell! Recycled gray water to flush the toilets? Excellent!
But if 500 employees have to drive 40 miles a day to work in the place—well,
how green is that?"

Maybe not very much,
but at least people are trying. At the very least, green architecture makes
mundane decisions like buying toilets a lot more interesting. My wife and I are
remodeling a mid-century modern house using green technologies. I’m waiting for
the Philippe Starck miniature rooftop
wind turbine to go on sale in the United States. In the meantime, however,
we’re considering more modest solutions, like two new toilets. We drove to a
green remodeling retailer in Chicago, where we learned all about the in and
outs of toilet design from a salesman with a LEED-certified unshaven chin. He
cheerfully explained how the miracles of modern technology have the solved the
problem of waste products sticking to
the sides of a toilet that has about a tea cup of water in the bowl. I even
tried out a dual-flush model in the store’s bathroom. Choosing a flush wasn’t
as empowering as I thought it would be, and I wonder how many flushes it would
take to save enough water to compensate for one fill up of a kiddie pool on a July
afternoon. But if we’re buying two new toilets anyway, why not buy models that
will help the environment?

Scaling up doesn’t
make the benefits of green architecture any clearer. Despite herself, McGuigan
likes Renzo Piano’s California Academy of Sciences, which has windows that open
and blue jeans for insulation. McGuigan doesn’t mention if the museum will include
a bin for recycling first-generation iPhones, but that would be a good idea.
The Academy of Sciences hopes to score a LEED platinum rating so that it can be
the greenest museum in the United States–at least until someone builds a
museum of green technologies. Despite the elegance of its low-slung profile and
its roof of indigenous weeds, Piano’s museum illustrates another problem with
green architecture in a post-industrial society. It’s hard to beat a yurt for
sustainability. A Wal-Mart-sized museum has a pretty big carbon footprint. So there’s no air conditioning system, but the museum’s parking
lots will still be full of SUVs and minivans, its garbage cans filled with
enough juice boxes to build a bridge to Oakland. Even if the green benefits of Piano’s museum are largely symbolic, what’s wrong with that?

It’s easy to be
dismissive of green architecture projects large and small, but maybe hype and
smugness are necessary to the process. After all, saving energy isn’t a fad
that will go away soon. Greenhouse gasses are going to keep increasing at an
alarming rate for the next few decades no matter what we do, so a little smug
self-satisfaction is all the benefit we’re likely to see in the short
term.